This page contains a list of the greatest Soccer Players. The pantheon dataset contains 16,880 Soccer Players, 134 of which were born in Nigeria. This makes Nigeria the birth place of the 23rd most number of Soccer Players behind Switzerland and Austria. 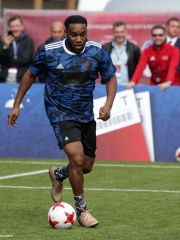 With an HPI of 54.38, Jay-Jay Okocha is the most famous Soccer Player.  His biography has been translated into 44 different languages on wikipedia.

Augustine Azuka Okocha ( ə-KOTCH-ə; born 14 August 1973), commonly known as Jay-Jay Okocha, is a Nigerian former professional footballer who played as an attacking midfielder. He played 73 times for the Nigeria national team between 1993 and 2006, scoring 14 times, and was a member of three FIFA World Cup squads. He is regarded as one of the greatest football players from Africa.He played across multiple leagues, starting his career at Enugu Rangers in the Nigerian Professional Football League before moving to Borussia Neunkirchen in Oberliga Südwest, Germany's third division in July 1990. He would play in the Bundesliga, Turkish Süper Lig, French Ligue 1, English Premier League, EFL Championship, and Qatar Stars League before his retirement in 2008. 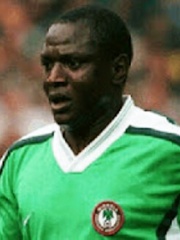 With an HPI of 48.77, Rashidi Yekini is the 2nd most famous Soccer Player.  His biography has been translated into 27 different languages.

Rashidi Yekini (23 October 1963 – 4 May 2012) was a Nigerian professional footballer who played as a forward. He is all-time top goalscorer for his nation. His professional career, which spanned more than two decades, was mainly associated with Vitória de Setúbal in Portugal, but he also played in six other countries besides his own.Yekini scored 37 goals as a Nigerian international footballer, and represented the nation in seven major tournaments, including two World Cups where he scored the country's first-ever goal in the competition. He was also named the African Footballer of the Year in 1993. 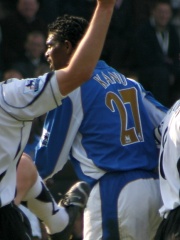 With an HPI of 47.34, Nwankwo Kanu is the 3rd most famous Soccer Player.  His biography has been translated into 45 different languages.

Nwankwo Kanu (born 1 August 1976) is a Nigerian former professional footballer who played as a forward. He was a member of the Nigeria national team, and played for Nigerian team Iwuanyanwu Nationale, Dutch side Ajax, Inter Milan of Italy, and English clubs Arsenal, West Bromwich Albion and Portsmouth.Kanu won a UEFA Champions League medal, a UEFA Cup medal, three FA Cup medals and two African Player of the Year awards amongst others. He is one of few players to have won the Premier League, FA Cup, Champions League, UEFA Cup and an Olympic Gold Medal. He made the third-most substitute appearances in Premier League history, appearing from the bench 118 times, and is regarded as one of the best players in African football history.He is also a UNICEF Goodwill Ambassador, and African brand ambassador for digital TV operator StarTimes. He is also the owner of Kanu Sports TV, an Internet sports television company.

With an HPI of 46.32, Tijani Babangida is the 4th most famous Soccer Player.  His biography has been translated into 26 different languages.

Tijani Babangida (born 25 September 1973) is a Nigerian former professional footballer, who played as a winger. Known for his pace, his playing style was sometimes compared to that of Marc Overmars. Babangida spent the majority of his playing career at Ajax. Overall, he played in five countries on three continents. At club level, Babangida spent nine years in Netherlands, playing for VVV-Venlo, Roda JC Ajax, and Vitesse. winning the Eredivisie plus KNVB Cup double with the latter side. He played over 30 games for his national side, including four at the 1998 World Cup in France. He participated in two Africa Cup of Nations tournaments and won the 1996 Olympics with Nigeria. Babangida made his international debut in 1994. He lost his place in the squad right before the 2002 World Cup. After a two-year lay-off from international football, Babangida was recalled to the Nigeria team for the 2004 African Cup of Nations preparations in Tunisia. 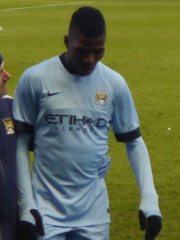 With an HPI of 46.19, Kelechi Iheanacho is the 5th most famous Soccer Player.  His biography has been translated into 41 different languages.

Kelechi Promise Iheanacho listen (spelled Ịheanachọ in Igbo) (born 3 October 1996) is a Nigerian professional footballer who plays as a forward for Premier League club Leicester City and the Nigeria national team. Iheanacho began his senior career at Manchester City during the 2015–16 season. He moved to Leicester City in 2017 for a reported £25 million fee. Iheanacho was part of the Nigeria squad that won the 2013 FIFA U-17 World Cup and the Nigeria U-20 team at the 2015 FIFA U-20 World Cup. He made his senior debut for Nigeria in 2015, and played at the 2018 FIFA World Cup and 2021 Africa Cup of Nations.

With an HPI of 45.48, Taribo West is the 6th most famous Soccer Player.  His biography has been translated into 28 different languages.

Taribo West (born 26 March 1974) is a Nigerian pastor and former professional footballer who played as a defender. He is best remembered for his various unusual and colourful hairstyles.After winning several major trophies with Auxerre in French football, West went on to play for both Milanese clubs, Inter Milan and AC Milan. He also appeared in the top-level leagues of England and Germany. At international level, West won 42 caps for Nigeria between 1994 and 2005, taking part in two World Cups and two African Championships. He also represented his country at the 1996 Olympics, winning a gold medal. 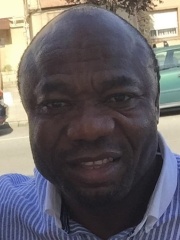 With an HPI of 45.11, Emmanuel Amunike is the 7th most famous Soccer Player.  His biography has been translated into 26 different languages. 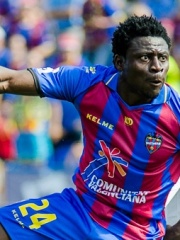 With an HPI of 44.25, Obafemi Martins is the 8th most famous Soccer Player.  His biography has been translated into 43 different languages.

Obafemi Akinwunmi Martins (born 28 October 1984) is a Nigerian former professional footballer who played as a forward. He is known for his speed on the ball. After leaving Nigeria for Italy at age 16, he has since played for a number of top-division clubs around Europe. He began his senior career in 2002 at Serie A club Inter Milan, before he moved to Premier League club Newcastle United in 2006, and then to Bundesliga club VfL Wolfsburg in 2009. Having joined Russian Premier League side Rubin Kazan in July 2010, they loaned him to Birmingham City in January 2011. He spent a season with La Liga club Levante, he played for Seattle Sounders FC of Major League Soccer from 2013 to 2015, scoring 40 goals, before spending several years in China with Shanghai Shenhua and Wuhan. In club football, Martins has won the Serie A title, the Italian Cup (twice), and the Italian Super Cup, all with Inter. With Birmingham he scored the winning goal in the 2011 Football League Cup Final. He has played European football with Inter, Newcastle and Wolfsburg, winning the UEFA Intertoto Cup with Newcastle. His highest scoring league seasons so far have seen him score 11 goals in the 2004–05 Serie A, and 17 in both the 2006–07 Premier League and 2014 MLS. In international football, Martins has been in the Nigerian squad for the Africa Cup of Nations in 2006, 2008 and 2010, and for the FIFA World Cup in 2010. Martins had two brothers who also played football professionally. His elder brother, Oladipupo Martins, played for Reggiana, Partizan and Innsbruck before retiring from football in 2009 due to heart problems. He died on 8 August 2011 of a suspected heart attack in Lagos, Nigeria. Martins' younger brother is John Ronan Martins. The name "Obafemi" translates literally to "the king loves me" in the Yoruba language.

With an HPI of 43.84, Daniel Amokachi is the 9th most famous Soccer Player.  His biography has been translated into 25 different languages.

Daniel Owefin Amokachi (born 30 December 1972) is a Nigerian football manager and former professional footballer and a member of the dubious goals panel for the Premier League. As a player he was a forward who notably played in the Premier League for Everton and was part of their 1995 FA Cup winning team, he also played top flight football in both Belgium and Turkey with extended spells at Club Brugge and Beşiktaş. Whilst with Brugge in 1992 he scored the club's first goal in the UEFA Champions League. He also had a brief spells with Ranchers Bees, Colorado Rapids and Nasarawa United. He was capped 44 times by Nigeria, scoring 13 goals. His spell in international football saw him win the African Cup of Nations in 1994 and a gold medal at the 1996 Olympics. He was also present in his nations squads for World Cup 94 and World Cup 98. Upon retiring, Amokachi moved into coaching and has spent time as manager of Nasarawa United, Enyimba, Ifeanyi Ubah and JS Hercules. He has also spent two spells as assistant coach of Nigeria, as well as managing his nation in an interim basis from 2014 to 2015. 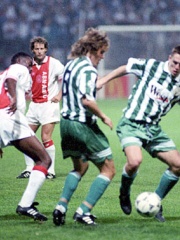 With an HPI of 43.46, Finidi George is the 10th most famous Soccer Player.  His biography has been translated into 28 different languages.

George Finidi (born 15 April 1971), known as Finidi George, is a Nigerian professional football coach and former player who is currently the head coach of Nigeria Professional Football League club Enyimba F.C. As a player, he played as a right winger. After making a name for himself at Ajax in the Netherlands – being a leading figure in a team which won eight major titles, including the 1995 Champions League – he played several years in Spain with Real Betis, also having a brief spell in England before retiring. Finidi was an important member of the Nigeria team during the 1990s, appearing in two World Cups. Finidi played throughout his footballing career for Nigeria with his iconic number 7 jersey. In September 2021, Enyimba F.C. named Finidi as their new head coach.