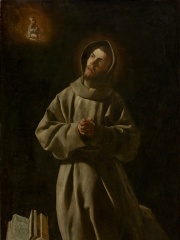 With an HPI of 79.22, Anthony of Padua is the most famous Portuguese Religious Figure.  His biography has been translated into 66 different languages on wikipedia.

Anthony of Padua (Italian: Antonio di Padova) or Anthony of Lisbon (Portuguese: António/Antônio de Lisboa; born Fernando Martins de Bulhões; 15 August 1195 – 13 June 1231) was a Portuguese Catholic priest and friar of the Franciscan Order. He was born and raised by a wealthy family in Lisbon, Portugal, and died in Padua, Italy. Noted by his contemporaries for his powerful preaching, expert knowledge of scripture, and undying love and devotion to the poor and the sick, he was one of the most quickly canonized saints in church history, being canonized less than a year after his death. He was proclaimed a Doctor of the Church by Pope Pius XII on 16 January 1946. 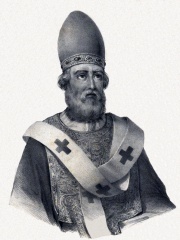 With an HPI of 72.02, Pope Damasus I is the 2nd most famous Portuguese Religious Figure.  His biography has been translated into 76 different languages.

Pope Damasus I (; c. 305 – 11 December 384) was the bishop of Rome from October 366 to his death. He presided over the Council of Rome of 382 that determined the canon or official list of sacred scripture. He spoke out against major heresies (including Apollinarianism and Macedonianism) and thus solidifying the faith of the Catholic Church, and encouraged production of the Vulgate Bible with his support for Jerome. He helped reconcile the relations between the Church of Rome and the Church of Antioch, and encouraged the veneration of martyrs. As well as various prose letters and other pieces Damasus was the author of Latin verse. Alan Cameron describes his epitaph for a young girl called Projecta (of great interest to scholars as the Projecta Casket in the British Museum may have been made for her) as "a tissue of tags and clichés shakily strung together and barely squeezed into the meter". Damasus has been described as "the first society Pope", and was possibly a member of a group of Hispanic Christians, largely related to each other, who were close to the Hispanic Theodosius I.A number of images of "DAMAS" in gold glass cups probably represent him and seem to be the first contemporary images of a pope to survive, though there is no real attempt at a likeness. "Damas" appears with other figures, including a Florus who may be Projecta's father. It has been suggested that Damasus or another of the group commissioned and distributed these to friends or supporters, as part of a programme "insistently inserting his episcopal presence in the Christian landscape".He is recognized as a saint by the Catholic Church; his feast day is 11 December. In the Eastern Orthodox Church his feast day is 13 November. 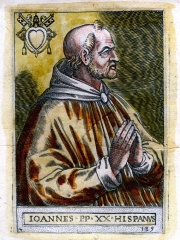 With an HPI of 69.87, Pope John XXI is the 3rd most famous Portuguese Religious Figure.  His biography has been translated into 64 different languages.

Pope John XXI (Latin: Ioannes XXI; c. 1215 – 20 May 1277), born Pedro Julião (Latin: Petrus Iulianus), was head of the Catholic Church and ruler of the Papal States from 8 September 1276 to his death on 20 May 1277. Apart from Damasus I (from Roman Lusitania), he has been the only Portuguese pope. He is sometimes identified with the logician and herbalist Peter of Spain (Latin: Petrus Hispanus; Portuguese: Pedro Hispano), which would make him the only pope to have been a physician. 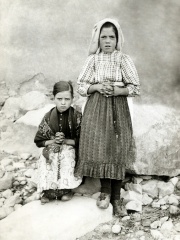 With an HPI of 65.10, Sister Lúcia is the 4th most famous Portuguese Religious Figure.  Her biography has been translated into 26 different languages.

Lúcia de Jesus Rosa dos Santos, OCD, (28 March 1907 – 13 February 2005) also known as Lúcia of Fátima and by her religious name Maria Lúcia of Jesus and of the Immaculate Heart, was a Portuguese Catholic Discalced Carmelite nun, one of the three children, along with her cousins Francisco and Jacinta Marto, who claimed to have witnessed Marian apparitions in Fátima in 1917. 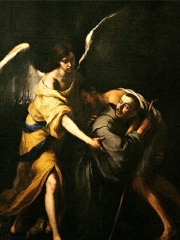 With an HPI of 62.53, John of God is the 5th most famous Portuguese Religious Figure.  His biography has been translated into 26 different languages.

John of God (Portuguese: João de Deus; Spanish: Juan de Dios; Latin: Joannes Dei; March 8, 1495 – March 8, 1550) was a Portuguese soldier turned health-care worker in Spain, whose followers later formed the Brothers Hospitallers of Saint John of God, a worldwide Catholic religious institute dedicated to the care of the poor, sick, and those suffering from mental disorders. He has been canonized by the Catholic Church, and is considered one of the leading religious figures in the Iberian Peninsula. 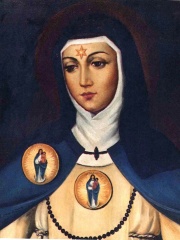 With an HPI of 56.78, Beatrice of Silva is the 6th most famous Portuguese Religious Figure.  Her biography has been translated into 15 different languages.

Beatrice of Silva (Campo Maior, Portugal ca. 1424 – Toledo, Castile, 16 August 1492), born Beatriz de Menezes da Silva, was a Portuguese noblewoman who became the foundress of the monastic Order of the Immaculate Conception. Amadeus of Portugal's younger sister, she is honored as a saint by the Roman Catholic Church. 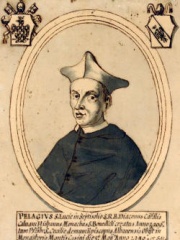 With an HPI of 55.10, Pelagio Galvani is the 7th most famous Portuguese Religious Figure.  His biography has been translated into 16 different languages.

Pelagio Galvani (c. 1165 – 30 January 1230, Portuguese: Paio Galvão Latin: Pelagius) was a Leonese cardinal, and canon lawyer. He became a papal legate and leader of the Fifth Crusade. Born at Guimarães, his early life is little known. It is repeatedly claimed that he entered the Order of Saint Benedict but this is not proven. Pope Innocent III created him cardinal-deacon of Santa Lucia in Septisolio around 1206. Later, he was promoted to the rank of cardinal-priest of S. Cecilia (probably on 2 April 1211), and finally opted for the suburbicarian see of Albano in the spring of 1213. He subscribed the papal bulls between 4 May 1207 and 26 January 1230. He was sent on a diplomatic mission to Constantinople in 1213. During this two-year mission he attempted to close Orthodox churches and imprison the clergy, but this caused such domestic upset that Henry of Flanders, the Latin Emperor of Constantinople, reversed his actions which had caused the "tempest which held the city of Constantine in its grip", as noted a contemporary historian. Three years later he was elected Latin Patriarch of Antioch but his election was not ratified by the Holy See. He was dispatched in 1218 by Pope Honorius III to lead the Fifth Crusade at Damietta in Egypt, and made a poor strategic decision in turning down favourable peace offers made by the sultan al-Kamil. During his absence, the see of Albano was administer by Thomas of Capua. He became dean of the Sacred College of Cardinals at the election to the papacy of Cardinal Ugolino Conti, who became Pope Gregory IX, on 19 March 1227. He was one of the leaders of the papal army in 1229–1230 during the War of the Keys against the Emperor Frederick II. He died at Monte Cassino and was buried there. 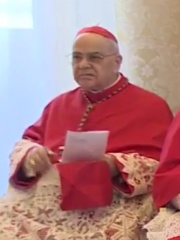 With an HPI of 54.15, José Saraiva Martins is the 8th most famous Portuguese Religious Figure.  His biography has been translated into 20 different languages.

José Saraiva Martins, C.M.F. GCC (born 6 January 1932) is a Portuguese Cardinal of the Roman Catholic Church. He was prefect of the Congregation for the Causes of Saints from 1998 to 2008. Born in Gagos de Jarmelo in Guarda, Portugal, to Antonio and Maria (née da Natividade Martins) Saraiva, he joined the Congregation of the Missionary Sons of the Immaculate Heart of Mary, commonly known as the Claretians, and professed his vows on 22 August 1950. Saraiva Martins was ordained as a priest by Archbishop Ettore Cunial on 16 March 1957. He studied at the Pontifical Gregorian University and the Pontifical University of St. Thomas Aquinas (Angelicum) in Rome, where he earned a licentiate and a doctorate (respectively) in theology. Saraiva Martins taught metaphysics for a year in Marino, Italy, then in 1959 came to the Roman Claretianum, where he taught fundamental and sacramental theology for a decade. He became rector of the Pontifical Urbaniana University for three terms (1977–1980, 1980–1983, 1986–1988). On 26 May 1988, Saraiva Martins was appointed Secretary of the Congregation for Catholic Education and titular archbishop of Thuburnica. He received his episcopal consecration from Cardinal Agostino Casaroli, with Archbishops Jan Pieter Schotte and Giovanni Battista Re serving as co-consecrators, on the following 2 July in the Basilica of Ss. XII Apostoli. On 30 May 1998, he was named Prefect of the Congregation for the Causes of Saints. Pope John Paul made him Cardinal Deacon of Nostra Signora del Sacro Cuore in the consistory of 21 February 2001. Like all major Vatican officials he lost his position on 2 April 2005 on the death of the pope. He was one of the cardinal electors who participated in the 2005 papal conclave that elected Pope Benedict XVI, who later confirmed him as prefect on 21 April 2005. On 9 July 2008, Pope Benedict XVI accepted his resignation as prefect to be succeeded by Angelo Amato. On 24 February 2009, he was promoted to the order of cardinal bishops, with title of the suburbicarian see of Palestrina. Pope Benedict XVI allowed Martins to remain as Roman Postulator for the Cause for José Sánchez del Río, a 14-year-old Mexican youth and Cristeros who died a martyr. Martins had conducted the beatification ceremony in Mexico City for the young boy as a stand-in for Pope Benedict XVI. Sanchez del Rio was finally canonized on 16 October 2016 in Rome by Pope Francis. 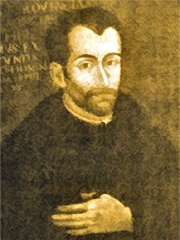 With an HPI of 53.05, António de Andrade is the 9th most famous Portuguese Religious Figure.  His biography has been translated into 18 different languages.

António de Andrade (1580 – March 19, 1634) was a Jesuit priest and explorer from Portugal. He entered the Society of Jesus in 1596. From 1600 until his death in 1634 he was engaged in missionary activity in India. Andrade was the first known European to have crossed the Himalayas and reached Tibet, establishing the first Catholic mission on Tibetan soil. 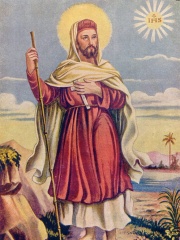 With an HPI of 52.54, John de Britto is the 10th most famous Portuguese Religious Figure.  His biography has been translated into 16 different languages.