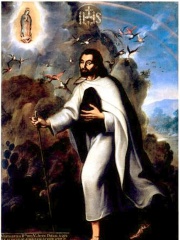 With an HPI of 60.36, Juan Diego is the most famous Mexican Religious Figure.  His biography has been translated into 26 different languages on wikipedia.

Juan Diego Cuauhtlatoatzin, also known as Juan Diego (Spanish pronunciation: [ˌxwanˈdjeɣo]; 1474–1548), was a Chichimec peasant and Marian visionary. He is said to have been granted apparitions of the Virgin Mary on four occasions in December 1531: three at the hill of Tepeyac and a fourth before don Juan de Zumárraga, then bishop of Mexico. The Basilica of Our Lady of Guadalupe, located at the foot of Tepeyac, houses the cloak (tilmahtli) that is traditionally said to be Juan Diego's, and upon which the image of the Virgin is said to have been miraculously impressed as proof of the authenticity of the apparitions. Juan Diego's visions and the imparting of the miraculous image, as recounted in oral and written colonial sources such as the Huei tlamahuiçoltica , are together known as the Guadalupe event (Spanish: el acontecimiento Guadalupano), and are the basis of the veneration of Our Lady of Guadalupe. This veneration is ubiquitous in Mexico, prevalent throughout the Spanish-speaking Americas, and increasingly widespread beyond. As a result, the Basilica of Our Lady of Guadalupe is now one of the world's major Christian pilgrimage destinations, receiving 22 million visitors in 2010.Juan Diego is the first Catholic saint indigenous to the Americas. He was beatified in 1990 and canonized in 2002 by Pope John Paul II, who on both occasions traveled to Mexico City to preside over the ceremonies. 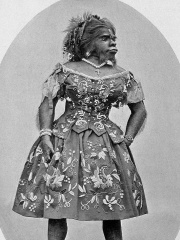 With an HPI of 58.73, Julia Pastrana is the 2nd most famous Mexican Religious Figure.  Her biography has been translated into 27 different languages.

Julia Pastrana (August 1834 – 25 March 1860) was a performer and singer during the 19th century who had hypertrichosis. Pastrana, an indigenous woman from Mexico, was born in 1834, somewhere in the state of Sinaloa. She was born with a genetic condition, hypertrichosis terminalis (or generalized hypertrichosis lanuginosa); her face and body were covered with straight black hair. Her ears and nose were unusually large, and her teeth were irregular. The latter condition was caused by a rare disease, undiagnosed in her lifetime, gingival hyperplasia, which thickened her lips and gums. 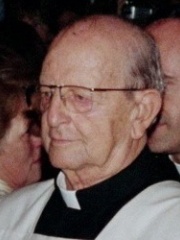 With an HPI of 57.56, Marcial Maciel is the 3rd most famous Mexican Religious Figure.  His biography has been translated into 15 different languages.

Marcial Maciel Degollado (March 10, 1920 – January 30, 2008) was a Mexican Catholic priest who founded the Legion of Christ and the Regnum Christi movement. He was general director of the legion from 1941 to 2005. Throughout most of his career, he was respected within the Church as "the greatest fundraiser of the modern Roman Catholic church" and as a prolific recruiter of new seminarians. Late in his life, Maciel was revealed to have been a long time drug addict who sexually abused many boys and young men in his care. After his death, it came to light that he had also maintained sexual relationships with at least four women, one of whom was a minor at the time. He fathered as many as six children, two of whom he is alleged to have sexually abused.In 2006, Pope Benedict XVI removed Maciel from active ministry, based on the results of an investigation that he had started in his previous role as head of the Congregation for the Doctrine of the Faith before his election as Pope in April 2005. Maciel was ordered "to conduct a reserved life of prayer and penance, renouncing every public ministry". He died in 2008. On March 25, 2010, a communiqué on the legion's website acknowledged as factual the "reprehensible actions" by Maciel, including sexual abuse of minor seminarians. In May 2010, the Vatican denounced Maciel's actions and appointed a Papal Delegate to oversee the order and its governance. 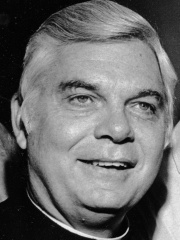 With an HPI of 54.00, Bernard Francis Law is the 4th most famous Mexican Religious Figure.  His biography has been translated into 23 different languages.

Bernard Francis Law (November 4, 1931 – December 20, 2017) was an American cardinal of the Roman Catholic Church, known largely for covering up the serial rape of children by Catholic priests. He served as Archbishop of Boston, archpriest of the Basilica di Santa Maria Maggiore, and Cardinal Priest of Santa Susanna, which was the American parish in Rome until 2017, when the American community was relocated to San Patrizio. Law was Archbishop of Boston from 1984 until his resignation on December 13, 2002, after his involvement in the Catholic Archdiocese of Boston sex abuse scandal became public knowledge. Law was proven to have ignored or concealed the molestation of numerous underage children; Church documents demonstrate that he had extensive knowledge concerning widespread child sexual abuse committed by dozens of Catholic priests within his archdiocese over a period of almost two decades, and that he failed to report these crimes to the authorities, instead merely transferring the accused priests between parishes. One priest in Law's archdiocese, John Geoghan, was alleged to have raped or molested more than 130 children in six different parishes in a career which spanned 30 years. Law was widely denounced for his handling of the sexual abuse cases, and outside the church his public image was irreparably tarnished in the aftermath of the scandal. Two years after Law resigned from his position in Boston, an act which Bishop William S. Skylstad called "an important step in the healing process", Pope John Paul II appointed him Archpriest of the Basilica di Santa Maria Maggiore in Rome in 2004. He resigned from this position upon reaching the age of 80 in November 2011 and died in Rome on December 20, 2017, at the age of 86. 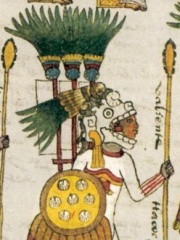 With an HPI of 53.37, Tlacaelel is the 5th most famous Mexican Religious Figure.  His biography has been translated into 19 different languages.

Tlacaelel I (1397 – 1487) (Classical Nahuatl: Tlācaēllel Nahuatl pronunciation: [tɬaːkaˈeːllel], "Man of Strong Emotions," from "tlācatl," person and "ēllelli," strong emotion) was the principal architect of the Aztec Triple Alliance and hence the Mexica (Aztec) empire. He was the son of Emperor Huitzilihuitl and Queen Cacamacihuatl, nephew of Emperor Itzcoatl, father of poet Macuilxochitzin, and brother of Emperors Chimalpopoca and Moctezuma I. During the reign of his uncle Itzcoatl, Tlacaelel was given the office of Tlacochcalcatl, but during the war against the Tepanecs in the late 1420s, he was promoted to first adviser to the ruler, a position called Cihuacoatl in Nahuatl, an office that Tlacaelel held during the reigns of four consecutive Tlatoque, until his death in 1487. Tlacaelel recast or strengthened the concept of the Aztecs as a chosen people, elevated the tribal god/hero Huitzilopochtli to top of the pantheon of gods, and increased militarism. In tandem with this, Tlacaelel is said to have increased the level and prevalence of human sacrifice, particularly during a period of natural disasters that started in 1446 (according to Diego Durán). Durán also states that it was during the reign of Moctezuma I, as an invention of Tlacaelel that the flower wars, in which the Aztecs fought Tlaxcala and other Nahuan city-states, were instigated. To strengthen the Aztec nobility, he helped create and enforce sumptuary laws, prohibiting commoners from wearing certain adornments such as lip plugs, gold armbands, and cotton cloaks. He also instigated a policy of burning the books of conquered peoples with the aim of erasing all memories of a pre-Aztec past.When he dedicated the seventh reconstruction of the Templo Mayor in Tenochtitlan, Tlacaelel had brought his nation to the height of its power. The dedication took place in 1484 and was celebrated with the sacrifice of many war captives. After Tlacaelel's death in 1487, the Mexica Empire continued to expand north into the Gran Chichimeca and south toward the Maya lands. 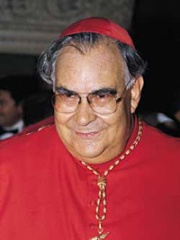 With an HPI of 52.56, Juan Jesús Posadas Ocampo is the 6th most famous Mexican Religious Figure.  His biography has been translated into 16 different languages.

Juan Jesús Posadas Ocampo (11 November 1926 – 24 May 1993) was an Archbishop of the Catholic Church in Mexico who served as the eighth archbishop of the see of Guadalajara and as a cardinal of the Roman Catholic Church. Posadas Ocampo was elevated to the cardinalate by Pope John Paul II on the consistory of 28 June 1991. On 24 May 1993, Cardinal Posadas was murdered by 14 bullets at Miguel Hidalgo y Costilla Guadalajara International Airport. Officially, Mexican-American sicarios were carrying out a contract killing for the Tijuana Cartel when Cardinal Posadas was allegedly mistaken for rival Sinaloa Cartel drug lord Joaquín "El Chapo" Guzmán. Allegations have continued to be investigated, however, that the Cardinal was actually murdered by the Mexican Government in order to cover up collusion between Mexican drug cartels and human trafficking rings and senior politicians during Mexico's 90-year long dictatorial rule by the Institutional Revolutionary Party (PRI). 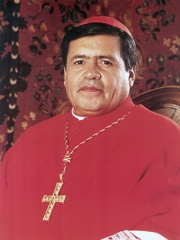 With an HPI of 50.17, Norberto Rivera Carrera is the 7th most famous Mexican Religious Figure.  His biography has been translated into 24 different languages. 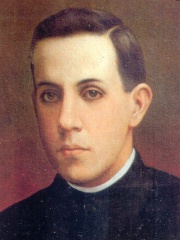 With an HPI of 49.95, Miguel Pro is the 8th most famous Mexican Religious Figure.  His biography has been translated into 17 different languages.

José Ramón Miguel Agustín Pro Juárez, also known as Blessed Miguel Pro, SJ (January 13, 1891 – November 23, 1927) was a Mexican Jesuit priest executed under the presidency of Plutarco Elías Calles on the false charges of bombing and attempted assassination of former Mexican President Álvaro Obregón.Pro's arrest, lack of trial, and evidential support gained prominence during the Cristero War. Known for his religious piety and innocence, he was beatified in Rome on September 25, 1988, by Pope John Paul II as a Catholic martyr, killed in odium fidei (in hatred of the faith). 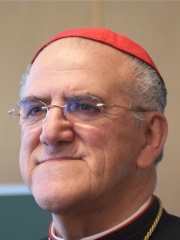 With an HPI of 49.34, Javier Lozano Barragán is the 9th most famous Mexican Religious Figure.  His biography has been translated into 19 different languages. 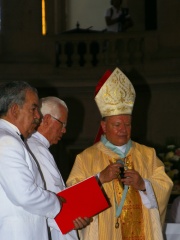 With an HPI of 48.92, Juan Sandoval Íñiguez is the 10th most famous Mexican Religious Figure.  His biography has been translated into 20 different languages.