This page contains a list of the greatest Portuguese Racing Drivers. The pantheon dataset contains 888 Racing Drivers, 5 of which were born in Portugal. This makes Portugal the birth place of the 23rd most number of Racing Drivers behind Denmark and Ireland.

With an HPI of 64.66, Mário de Araújo Cabral is the most famous Portuguese Racing Driver.  His biography has been translated into 16 different languages on wikipedia. 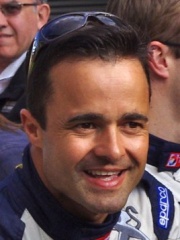 With an HPI of 57.15, Pedro Lamy is the 2nd most famous Portuguese Racing Driver.  His biography has been translated into 26 different languages. 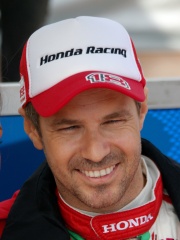 With an HPI of 56.54, Tiago Monteiro is the 3rd most famous Portuguese Racing Driver.  His biography has been translated into 27 different languages.

Tiago Vagaroso da Costa Monteiro (Portuguese pronunciation: [tiˈaɣu mõˈtɐjɾu]; born 24 July 1976) is a Portuguese professional racing driver currently competing in the World Touring Car Cup, driving a Honda Civic TCR for Münnich Motorsport. He competed in Formula One between 2005 and 2006 for the Jordan Grand Prix, Midland and Spyker MF1 teams – all different iterations of the same team as it was bought by new owners during a two-year stint as part of the Formula One paddock. He is the only Portuguese driver to have scored a Formula One podium finish, during the controversial 2005 United States Grand Prix. Monteiro started racing in the World Touring Car Championship in 2007 with Seat Sport, and remained with the Spanish manufacturer until 2012, when he switched to the new Honda team late in the season. He still remains with the Japanese manufacturer in 2019, having achieved his best championship finish of third in 2016, and also helped Honda to win the manufacturers' championship in 2013. He was leading the drivers' championship after 12 races in 2017, but injuries sustained in a crash in testing forced him to withdraw from the rest of the season. Monteiro is a 12-time World Touring Car race winner and achieved the eighth most wins in the WTCC, until it became the World Touring Car Cup in 2018.

With an HPI of 52.69, Pedro Chaves is the 4th most famous Portuguese Racing Driver.  His biography has been translated into 18 different languages.

Pedro António Matos Chaves (Portuguese pronunciation: [ˈpeðɾu ˈmatuʃ ˈʃavɨʃ]; born in Oporto, 27 February 1965) is a Portuguese racing driver. Chaves was the second Portuguese Formula Ford Champion, in 1986, starting an international career in 1987 in the British Formula Ford Championship. In 1990 he won the British F3000 Championship with the Madgwick Motorsport outfit, also racing in a few rounds of the FIA F3000 series. In 1991, he suffered a disastrous season in Formula One, failing to pre-qualify for 13 Grands Prix with an under-financed and uncompetitive Coloni. After failing to pre-qualify for the Portuguese Grand Prix, Chaves left the team, taking the remainder of his sponsorship money with him. At the end of that year Chaves had an agreement with Leyton House (which would be renamed to March F1) to compete in 1992, however the sponsorship money came too late, and Karl Wendlinger took the place.In 1992, Chaves returned to F3000, first with GJ Racing and later in the season moving to the more competitive Il Barone Rampante, with no results. Chaves then spent three years in the American Indy Lights series with Brian Stewart Racing, winning one race, in Vancouver in 1995. Chaves and Robbie Buhl were the only drivers to win that season other than Greg Moore, who won the rest of the events. In 1996, he moved to touring car racing and was second in the Spanish Touring Car Championship in a BMW, before racing a Porsche in the FIA GT Championship. Chaves moved to the Portuguese Rally Championship in 1998, winning the title in 1999 and 2000, with his co-driver Sérgio Paiva, in a works-supported Toyota Corolla WRC. In 2001, he took the Spanish GT Championship title, in a Saleen S7-R co-driven by Miguel Ramos. He has also gone back to drive in the 24 Hours of Le Mans and the FIA GT Championship, for Graham Nash Motorsport. In 2005 and 2006, he returned to the Portuguese Rally Championship to drive a works Renault Clio S1600. Chaves has since retired from racing and in 2006 became driver coach to A1 Team Lebanon. In 2008 he took over managerial duties in A1 Team Portugal. He is also managing the career of his son David. 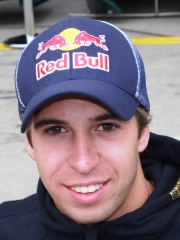 With an HPI of 47.81, António Félix da Costa is the 5th most famous Portuguese Racing Driver.  His biography has been translated into 17 different languages.

António Maria de Mello Breyner Félix da Costa (born 31 August 1991) is a Portuguese professional racing driver and the reigning FIA Formula E Drivers' Champion. He is perhaps best known for winning the Macau Grand Prix invitational Formula Three race in 2012 and 2016, as well as the Formula Renault 2.0 Northern European Cup in 2009. He is the younger half-brother of Duarte Félix da Costa, also a racing driver, who primarily competes in sportscar racing. After progressing through various levels of the junior formulae motorsport ladder, Félix da Costa's breakthrough year came during the 2012 season. Having started the season driving for the Carlin team in the GP3 Series, Félix da Costa was selected to join the Red Bull Junior Team, replacing Formula Renault 3.5 Series driver Lewis Williamson, who had failed to score a point in the first three meetings of the season. Félix da Costa assumed Williamson's drive with the Arden Caterham team, where he ultimately won four of the final five races to be held in the campaign en route to fourth position in the final championship standings, just 23 points behind eventual champion Robin Frijns. Félix da Costa moved to the Arden Caterham team full-time for the 2013 season.Both Félix da Costa and Frijns received tests with the Red Bull Racing Formula One team for the Young Drivers' test in Abu Dhabi – Félix da Costa's second such appearance at the tests, after driving for Force India in 2010 – with Félix da Costa setting the pace on the second day. He completed the season with the first Portuguese victory in the Macau Grand Prix in 58 years, leading every racing lap of the meeting en route to victory.