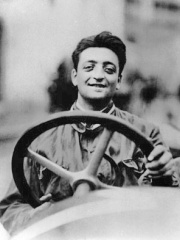 With an HPI of 80.15, Enzo Ferrari is the most famous Italian Racing Driver.  His biography has been translated into 61 different languages on wikipedia.

Enzo Anselmo Giuseppe Maria Ferrari, Cavaliere di Gran Croce OMRI (Italian: [ˈɛntso anˈsɛlmo ferˈraːri]; 20 February 1898 – 14 August 1988) was an Italian motor racing driver and entrepreneur, the founder of the Scuderia Ferrari Grand Prix motor racing team, and subsequently of the Ferrari automobile marque. He was widely known as "il Commendatore" or "il Drake". In his final years he was often referred to as "l'Ingegnere" (the Engineer) or "il Grande Vecchio (the Great Old Man)". 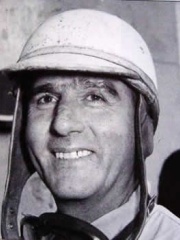 With an HPI of 75.62, Giuseppe Farina is the 2nd most famous Italian Racing Driver.  His biography has been translated into 50 different languages. 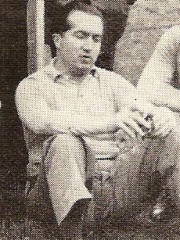 With an HPI of 75.08, Alberto Ascari is the 3rd most famous Italian Racing Driver.  His biography has been translated into 50 different languages.

Alberto Ascari (Italian pronunciation: [alˈbɛrto ˈaskari]; 13 July 1918 – 26 May 1955) was an Italian racing driver and twice Formula One World Champion. He was a multitalented racer who competed in motorcycle racing before switching to cars. Ascari won consecutive world titles in 1952 and 1953 for Scuderia Ferrari. He was the team's first World Champion and the last Italian to date to win the title. This was sandwiched by an appearance in the 1952 Indianapolis 500. Ascari also won the Mille Miglia in 1954. Ascari was noted for the careful precision and finely-judged accuracy that made him one of the safest drivers in a most dangerous era. Ascari remains along with Michael Schumacher Ferrari's only back-to-back World Champions, and he is also Ferrari's sole Italian champion. As the first driver to win multiple World Championship titles, he held the record for most World Championship titles in 1952–54, as a result he is one of 4 drivers to have held the record for most World Championship titles. Juan Manuel Fangio held the record in 1951-52 and 1954-2002 (jointly with Ascari in 1952 and 1954) and Michael Schumacher has held the record since 2002, although Schumacher now also shares that record with Lewis Hamilton. When Alberto was a young child, his father, Antonio, who was also a famous racing driver, died in an accident at the 1925 French Grand Prix. Alberto once admitted that he warned his children not to become extremely close to him because of the risk involved in his profession. Unfortunately, his warning proved true when he was killed during a test session for Scuderia Ferrari at the Autodromo Nazionale Monza. Ascari was notoriously superstitious and took great pains to avoid tempting fate. His unexplained fatal accident – at the same age as his father's, on the same day of the month and in eerily similar circumstances – remains one of Formula One racing's great tragic coincidences. 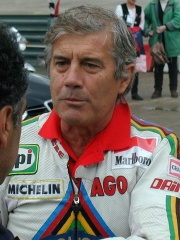 With an HPI of 71.19, Giacomo Agostini is the 4th most famous Italian Racing Driver.  His biography has been translated into 25 different languages.

Giacomo Agostini (Italian pronunciation: [ˈdʒaːkomo aɡoˈstiːni]; born 16 June 1942) is an Italian multi-time world champion Grand Prix motorcycle road racer. Nicknamed Ago, he amassed 122 Grand Prix wins and 15 World Championship titles. Of these, 68 wins and 8 titles came in the 500 cc class, the rest in the 350 cc class. For these achievements obtained over the course of a career spanning 17 years, the AMA described him as "...perhaps the greatest Grand Prix rider of all time". In 2010, Agostini was named an FIM Legend for his motorcycling achievements. 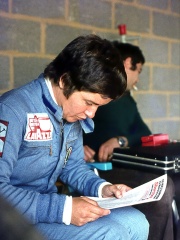 With an HPI of 69.80, Lella Lombardi is the 5th most famous Italian Racing Driver.  Her biography has been translated into 25 different languages.

Maria Grazia "Lella" Lombardi (26 March 1941 – 3 March 1992) was a racing driver from Italy. Born in Frugarolo, Piedmont, she participated in 17 Formula One World Championship Grands Prix, debuting on 20 July 1974 and finishing her career with half a point. She is the only female Formula One driver in history to have a top six finish in a World Championship race, which she did at the 1975 Spanish Grand Prix (Half points were awarded for this race due to a shortened race distance, hence Lombardi received half a point instead of the usual one point). As well as being the sole female driver to score points in Formula One (and the only driver with a career total of half a point), she is one of two who qualified for a Formula One race (the other being compatriot Maria Teresa de Filippis). 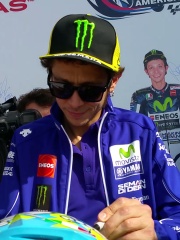 With an HPI of 69.04, Valentino Rossi is the 6th most famous Italian Racing Driver.  His biography has been translated into 56 different languages.

Valentino Rossi (; Italian: [valenˈtiːno ˈrossi]; born 16 February 1979) is an Italian professional motorcycle road racer and multiple MotoGP World Champion. Rossi is one of the greatest motorcycle racers of all time, with nine Grand Prix World Championships to his name – seven of which are in the premier class. Rossi is also the only road racer to have competed in 400 or more Grands Prix. He has ridden with number 46 his entire career, including the years when he was defending his title. He also owns the Sky Racing Team VR46 which currently participates in the Moto2 class and historically in the Moto3 class. After graduating to the premier class in 2000, Rossi won the 500cc World Championship and 8 Hours of Suzuka with Honda in 2001, the MotoGP World Championships (also with Honda) in 2002 and 2003 and continued his streak of back-to-back championships by winning the 2004 and 2005 titles after leaving Honda to join Yamaha. He lost the 2006 title with a crash in the final round at Valencia. In 2007 Rossi ultimately finished third overall, before regaining the title in 2008 and retaining it in 2009. After a 2010 season marred by a broken leg and no title defence, Rossi left Yamaha to join Ducati for the 2011 season. Rossi replaced Stoner at Ducati and endured two losing seasons with the Italian marque. It was confirmed in 2012 that he would rejoin Yamaha for the 2013 and 2014 seasons. On his return to Yamaha, he finished fourth in the standings in 2013, followed by three successive runner-up positions in 2014, 2015 and 2016. After Rossi won the 2017 Dutch TT, a multiple-year winless streak followed, although he managed to finish third in the 2018 championship even during this period. Rossi was contracted to race until the end of the 2020 season with Factory Yamaha, when he would be 41 years old.It was confirmed Rossi would leave the Factory Yamaha team at the end of 2020, and he confirmed on 26 September 2020 he would ride for the Petronas Yamaha Racing Team in the 2021 season. 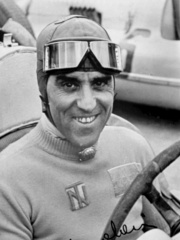 With an HPI of 68.70, Tazio Nuvolari is the 7th most famous Italian Racing Driver.  His biography has been translated into 24 different languages.

Tazio Giorgio Nuvolari (Italian pronunciation: [ˈtattsjo ˈdʒɔrdʒo nuvoˈlaːri]; 16 November 1892 – 11 August 1953) was an Italian racing driver. He first raced motorcycles and then concentrated on sports cars and single-seaters. A resident of Mantua, he was known as 'Il Mantovano Volante' (The Flying Mantuan) and nicknamed 'Nivola'. His victories—72 major races, 150 in all—included 24 Grands Prix, five Coppa Cianos, two Mille Miglias, two Targa Florios, two RAC Tourist Trophies, a Le Mans 24-hour race, and a European Championship in Grand Prix racing. Ferdinand Porsche called him "the greatest driver of the past, the present, and the future."Nuvolari started racing motorcycles in 1920 at the age of 27, winning the 1925 350cc European Championship. Having raced cars as well as motorcycles from 1925 until 1930, he then concentrated on cars, and won the 1932 European Championship with the Alfa Romeo factory team, Alfa Corse. After Alfa Romeo officially withdrew from Grand Prix racing Nuvolari drove for Enzo Ferrari's team, Scuderia Ferrari, who ran the Alfa Romeo cars semi-officially. In 1933 he won Le Mans in an Alfa Romeo as a member of Ferrari's team, and a month later won the Belgian Grand Prix in a works Maserati, having switched teams a week before the race. Mussolini helped persuade Ferrari to take Nuvolari back for 1935, and in that year he won the German Grand Prix in Ferrari's outdated Alfa Romeo, defeating more powerful rivals from Mercedes-Benz and Auto Union. It was the only time a non-German car won a European Championship race from 1935 to 1939. The relationship with Ferrari deteriorated during 1937, and Nuvolari raced an Auto Union in that year's Swiss Grand Prix. He rejoined the Auto Union team for the 1938 season and stayed with them through 1939 until Grand Prix racing was put on hiatus by World War II. The only major European race he never won was the Czechoslovakian Grand Prix. When Nuvolari resumed racing after the war he was 54 and in poor health. In his final appearance in competition, driving a Cisitalia-Abarth Tipo 204A at a Palermo hillclimb on 10 April 1950, he won his class and placed fifth overall. He died in 1953 from a stroke. 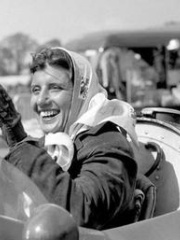 With an HPI of 68.09, Maria Teresa de Filippis is the 8th most famous Italian Racing Driver.  Her biography has been translated into 29 different languages.

Maria Teresa de Filippis (11 November 1926 – 8 January 2016) was an Italian racing driver, and the first woman to race in Formula One. She participated in five World Championship Grands Prix, debuting on 18 May 1958, but scored no championship points. Though her Formula One racing career was brief, she won races in other series and is remembered as a pioneer in the sport. 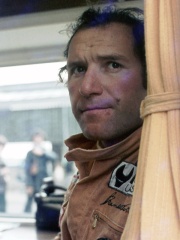 With an HPI of 67.94, Vittorio Brambilla is the 9th most famous Italian Racing Driver.  His biography has been translated into 22 different languages.

Vittorio Brambilla (11 November 1937 – 26 May 2001) was a Formula One driver from Italy who raced for the March, Surtees and Alfa Romeo teams. Particularly adept at driving in wet conditions, his nickname was "The Monza Gorilla", due to his often overly aggressive driving style and sense of machismo. He won one Formula One race during his career, the 1975 Austrian Grand Prix, held in the wet. 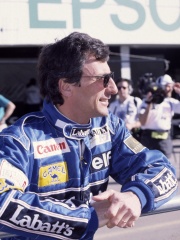 With an HPI of 67.78, Riccardo Patrese is the 10th most famous Italian Racing Driver.  His biography has been translated into 29 different languages.

Riccardo Gabriele Patrese (born 17 April 1954) is an Italian former racing driver, who raced in Formula One from 1977 to 1993. For 19 years, he held the record for the most Grand Prix starts. He became the first Formula One driver to achieve 200 Grand Prix starts when he appeared at the 1990 British Grand Prix, and the first to achieve 250 starts at the 1993 German Grand Prix. Patrese entered 257 Formula One World Championship Grands Prix and started 256 races making him the eighth most experienced F1 driver in history, after Rubens Barrichello, Michael Schumacher, Jenson Button, Fernando Alonso, Kimi Räikkönen, Felipe Massa and Lewis Hamilton. He was runner-up in the 1992 Formula One season and third in 1989 and 1991. He won six Formula One races, with a record gap of over six years between two of these – the 1983 South African Grand Prix and 1990 San Marino Grand Prix. Patrese also competed at the World Sportscar Championship for the Lancia factory team, finishing runner-up in 1982 and collecting eight wins.

Which Racing Drivers were alive at the same time? This visualization shows the lifespans of the 25 most globally memorable Racing Drivers since 1700.