This page contains a list of the greatest Australian Presenters. The pantheon dataset contains 110 Presenters, 3 of which were born in Australia. This makes Australia the birth place of the 5th most number of Presenters behind Germany and Israel. 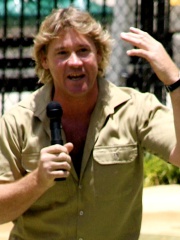 With an HPI of 63.95, Steve Irwin is the most famous Australian Presenter.  His biography has been translated into 76 different languages on wikipedia.

Stephen Robert Irwin (22 February 1962 – 4 September 2006), nicknamed "The Crocodile Hunter", was an Australian zookeeper, conservationist, television personality, wildlife expert, and environmentalist. Irwin grew up around crocodiles and other reptiles and was educated regarding them by his father Bob. He achieved international fame from the television series The Crocodile Hunter (1996–2007), an internationally broadcast wildlife documentary series that he co-hosted with his wife Terri. The couple also hosted the series Croc Files (1999–2001), The Crocodile Hunter Diaries (2002–2006), and New Breed Vets (2005). They also co-owned and operated Australia Zoo, founded by Irwin's parents in Beerwah, about 80 kilometres (50 mi) north of the Queensland state capital of Brisbane. They had two children, Bindi and Robert. In 2006, while filming a documentary in Australia's Great Barrier Reef, Irwin died from an injury caused by a stingray. His death became international news and was met with expressions of shock and grief by fans, the media, governments, and non-profit organizations. Numerous parks, zoos, streets, the vessel MY Steve Irwin, the snail species Crikey steveirwini, and the asteroid 57567 Crikey have been named in his honour. The Irwin family continues to operate Australia Zoo. 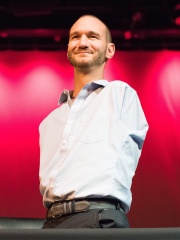 With an HPI of 54.32, Nick Vujicic is the 2nd most famous Australian Presenter.  His biography has been translated into 45 different languages.

Nicholas James Vujicic ( VOO-itch-itch; born 4 December 1982) is an Australian American Christian evangelist and motivational speaker of Serbian descent, born with tetra-amelia syndrome, a rare disorder characterised by the absence of arms and legs. 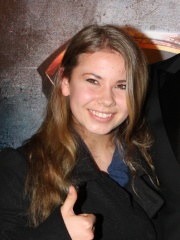 With an HPI of 26.83, Bindi Irwin is the 3rd most famous Australian Presenter.  Her biography has been translated into 26 different languages.

Bindi Sue Irwin (born 24 July 1998) is an Australian television personality, conservationist, zookeeper and actress. She is the elder of the two children of the late conservationist and television personality Steve Irwin and his conservationist wife, Terri Irwin, who is currently the owner of Australia Zoo. Bindi's younger brother is Robert, a television personality and photographer, and she is the granddaughter of naturalist and herpetologist Bob Irwin. When she was 9, Irwin hosted Bindi the Jungle Girl, a children's wildlife documentary TV series. She has also been involved in acting, singing, dancing, game show hosting, and has created two instructional fitness DVDs. She is also known for winning season 21 of Dancing with the Stars (US). She currently stars alongside her mother Terri and her younger brother Robert in Crikey! It's the Irwins.