This page contains a list of the greatest Nigerian Politicians. The pantheon dataset contains 15,577 Politicians, 24 of which were born in Nigeria. This makes Nigeria the birth place of the 96th most number of Politicians behind Myanmar (Burma) and Bangladesh. 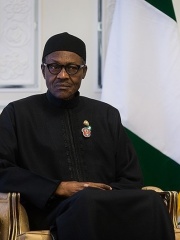 With an HPI of 62.21, Muhammadu Buhari is the most famous Nigerian Politician.  His biography has been translated into 69 different languages on wikipedia.

Muhammadu Buhari (listen) (born 17 December 1942) is a Nigerian politician, who has served as president of Nigeria since 2015.Buhari is a retired Nigerian Army major general who served as the country's military head of state from 31 December 1983 to 27 August 1985, after taking power in a military coup d'état. The term Buharism is ascribed to the authoritarian policies of his military regime.Buhari ran for president of Nigeria in 2003, 2007, and 2011. In December 2014, he emerged as the presidential candidate of the All Progressives Congress party for the 2015 general election. Buhari won the election, defeating incumbent President Goodluck Ebele Jonathan. This was the first time in the history of Nigeria that an incumbent president lost a general election. He was sworn in on 29 May 2015. In February 2019, Buhari was re-elected, defeating his closest rival, former Vice President Atiku Abubakar, by over 3 million votes. 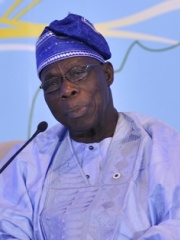 With an HPI of 54.92, Olusegun Obasanjo is the 2nd most famous Nigerian Politician.  His biography has been translated into 54 different languages.

Chief Olusegun Matthew Okikiola Ogunboye Aremu Obasanjo, , ( (listen) ; Yoruba: Olúṣẹ́gun Ọbásanjọ́ [olúʃɛ́ɡũ ɔbásanɟɔ];(Listen) born 5 March 1937) is a Nigerian political and military leader who served as Nigeria's head of state from 1976 to 1979 and later as its president from 1999 to 2007. Ideologically a Nigerian nationalist, he was a member of the Peoples Democratic Party (PDP) from 1999 to 2015, and from 2018 has been a member of the African Democratic Congress party (ADC). Born in the village of Ibogun-Olaogun to a farming family of the Owu branch of the Yoruba, Obasanjo was educated largely in Abeokuta, Ogun State. Joining the Nigerian Army, where he specialised in engineering, he spent time assigned in the Congo, Britain, and India, rising to the rank of major. In the latter part of the 1960s, he played a senior role in combating Biafran separatists during the Nigerian Civil War, accepting their surrender in 1970. In 1975, a military coup established a junta with Obasanjo as part of its ruling triumvirate. After the triumvirate's leader, Murtala Muhammed, was assassinated the following year, the Supreme Military Council appointed Obasanjo as head of state. Continuing Murtala's policies, Obasanjo oversaw budgetary cut-backs and an expansion in access to free school education. Increasingly aligning Nigeria with the United States, he also emphasised support for groups opposing white minority rule in southern Africa. Committed to restoring democracy, Obasanjo oversaw the 1979 election, after which he handed over control of Nigeria to the newly elected civilian president, Shehu Shagari. He then retired to Ota, Ogun, where he became a farmer, published four books, and took part in international initiatives to end various African conflicts. In 1993, Sani Abacha seized power in a military coup. Openly critical of Abacha's administration, in 1995 Obasanjo was arrested and convicted of being part of a planned coup, despite protesting his innocence. While imprisoned, he became a born again Christian, with providentialism strongly influencing his subsequent worldview. He was released following Abacha's death in 1998. Entering electoral politics, Obasanjo became the PDP candidate for the 1999 presidential election, which he won comfortably. As president, he de-politicised the military and both expanded the police and mobilised the army to combat widespread ethnic, religious, and secessionist violence. He withdrew Nigeria's military from Sierra Leone and privatised various public enterprises to limit his country's spiralling debt. He was re-elected in the 2003 election. Influenced by Pan-Africanist ideas, he was a keen supporter of the formation of the African Union and served as its chair from 2004 to 2006. Obasanjo's attempts to change the constitution to abolish presidential term limits were unsuccessful and brought criticism. In retirement, he earned a PhD in theology from the National Open University of Nigeria. Obasanjo has been described as one of the great figures of the second generation of post-colonial African leaders. He received praise both for overseeing Nigeria's transition to representative democracy in the 1970s and for his Pan-African efforts to encourage cooperation across the continent. Critics maintain that he was guilty of corruption, that his administrations oversaw human rights abuses, and that as president he became too interested in consolidating and maintaining his personal power. 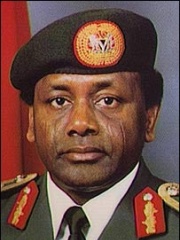 With an HPI of 51.56, Sani Abacha is the 3rd most famous Nigerian Politician.  His biography has been translated into 45 different languages.

Sani Abacha (listen) (20 September 1943 – 8 June 1998) was a Nigerian military officer and politician who ruled as the military head of state after seizing power in 1993 until his death in 1998. Abacha's seizure of power was the last successful coup d'etat in the Nigerian military history. Abacha served as Chief of Army Staff from 1985 to 1990, as Chief of Defence Staff from 1990 to 1993, and as Minister of Defence. Abacha is noted for having been the first Nigerian Army officer to attain the rank of a full military general without skipping a single rank.His rule saw the achievement of several economic feats and also recorded human rights abuses and several political assassinations. He has been dubbed a kleptocrat and a dictator by several modern commentators. He was succeeded as Nigeria's head of state by Abdulsalami Abubakar. 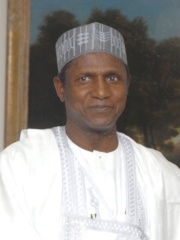 With an HPI of 50.95, Umaru Musa Yar'Adua is the 4th most famous Nigerian Politician.  His biography has been translated into 59 different languages. 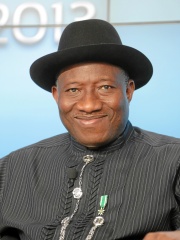 With an HPI of 50.63, Goodluck Jonathan is the 5th most famous Nigerian Politician.  His biography has been translated into 58 different languages.

Goodluck Ebele Azikiwe Jonathan (born 20 November 1957) is a Nigerian politician who served as the President of Nigeria from 2010 to 2015. He lost the 2015 presidential election to former military head of state General Muhammadu Buhari, and was the first incumbent president in Nigerian history to concede defeat in an election. Prior to that, he served as Vice President of Nigeria from 2007 to 2010 under the administration of Umaru Musa Yar'Adua; and in oil-rich Bayelsa State as Governor of Bayelsa State from 2005 to 2007. 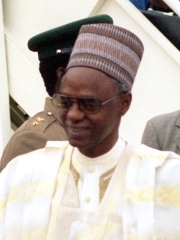 With an HPI of 49.74, Shehu Shagari is the 6th most famous Nigerian Politician.  His biography has been translated into 32 different languages.

Shehu Usman Aliyu Shagari (listen) (25 February 1925 – 28 December 2018), titled Turakin Sokoto from 1962, was the first democratically elected President of Nigeria, after the transfer of power by military head of state General Olusegun Obasanjo in 1979 giving rise to the Second Nigerian Republic.An experienced politician, he briefly worked as a teacher before entering politics in 1951; and was elected into the House of Representatives in 1954. At various times between 1958 through independence of Nigeria in 1960 and 1975, he held a cabinet post as a federal commissioner or as a federal minister. As President, Shagari presided over the mass deportation of West African migrants in 1983, which primarily impacted Ghanaian migrants in Nigeria. 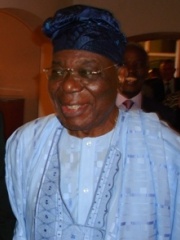 With an HPI of 49.66, Ernest Shonekan is the 7th most famous Nigerian Politician.  His biography has been translated into 27 different languages.

Chief Ernest Adegunle Oladeinde Shonekan (9 May 1936 – 11 January 2022) was a Nigerian lawyer and statesman who served as the interim Head of State of Nigeria from 26 August 1993 to 17 November 1993. He was titled Abese of Egbaland from 1981 (in addition to a variety of other chieftaincy titles).Prior to his political career, Shonekan was the chairman and chief executive of the United African Company of Nigeria (successor of The Niger Company), a vast Nigerian conglomerate, which at the time was the largest African-controlled company in Sub-Saharan Africa. 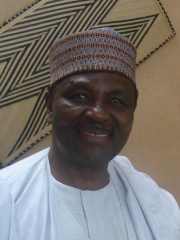 With an HPI of 49.57, Yakubu Gowon is the 8th most famous Nigerian Politician.  His biography has been translated into 32 different languages.

Yakubu Dan-Yumma 'Jack' Gowon (born 19 October 1934) is a retired Nigerian Army general and military leader. As Head of State of Nigeria, Gowon presided over a controversial Nigerian Civil War and delivered the famous "no victor, no vanquished" speech at the war's end in an effort to promote healing and reconciliation. The Nigerian Civil War is listed as one of the deadliest in modern history, with some accusing Gowon of crimes against humanity and genocide. Gowon maintains that he committed no wrongdoing during the war and that his leadership saved the country.An Anglican Christian from a minority Ngas family of Northern Nigeria, Gowon is a Nigerian nationalist, and a believer in the unity and oneness of Nigeria. Gowon's rise to power following the July 1966 counter-coup cemented military rule in Nigeria. Consequently, Gowon is the longest-serving head of state of Nigeria, ruling for almost nine years until his overthrow in the coup d'état of 1975 by Brigadier Murtala Mohammed. 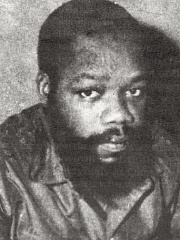 With an HPI of 49.52, C. Odumegwu Ojukwu is the 9th most famous Nigerian Politician.  His biography has been translated into 25 different languages.

Chukwuemeka "Emeka" Odumegwu Ojukwu (4 November 1933 – 26 November 2011) was a Nigerian military officer, statesman and politician who served as the military governor of the Eastern Region of Nigeria in 1966 and as president of the secessionist Republic of Biafra from 1967 to 1970, which declared independence from Nigeria during the Nigerian Civil War. He was active as a politician from 1983 until his death in 2011 at the age of 78. 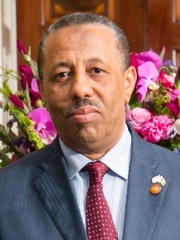 With an HPI of 49.38, Abdullah al-Thani is the 10th most famous Nigerian Politician.  His biography has been translated into 17 different languages.

Abdullah al-Thani (Arabic: عبد الله الثني Libyan pronunciation: [ʕæbˈdɑllɑ tˈtini, -ˈθæni]) is a Libyan politician who became prime minister of the House of Representatives of Libya on 11 March 2014, when he took over in an interim capacity after the dismissal of Ali Zeidan. He was previously the defence minister in the government of Zeidan.

Which Politicians were alive at the same time? This visualization shows the lifespans of the 12 most globally memorable Politicians since 1700.