This page contains a list of the greatest Bolivian Politicians. The pantheon dataset contains 15,710 Politicians, 34 of which were born in Bolivia. This makes Bolivia the birth place of the 71st most number of Politicians behind Philippines and Albania. 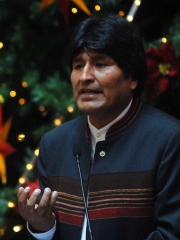 With an HPI of 72.78, Evo Morales is the most famous Bolivian Politician.  His biography has been translated into 94 different languages on wikipedia.

Juan Evo Morales Ayma (Spanish pronunciation: [ˈeβo moˈɾales]; born 26 October 1959) is a Bolivian politician and former cocalero activist who served as the 65th President of Bolivia from 2006 to 2019. Widely regarded as the country's first president to come from its indigenous population, his administration focused on the implementation of leftist policies and combating the influence of the United States and multinational corporations. Ideologically a socialist, he is the head of the Movement for Socialism (MAS) party. Born to an Aymara family of subsistence farmers in Isallawi, Orinoca Canton, Morales undertook a basic education before mandatory military service, moving to the Chapare Province in 1978. Growing coca and becoming a trade unionist, he rose to prominence in the campesino ("rural laborers") union. In that capacity, he campaigned against United States and Bolivian attempts to eradicate coca as part of the War on Drugs, denouncing these as an imperialist violation of indigenous Andean culture. His involvement in anti-government direct action protests resulted in multiple arrests. Morales entered electoral politics in 1995, became the leader of the MAS, and was elected to Congress in 1997. Coupled with populist rhetoric, his campaign focused on issues affecting indigenous and poor communities, advocating land reform and more equal redistribution of gas wealth. He gained increased visibility through the Cochabamba Water War and gas conflict. In 2002, he was expelled from Congress for encouraging anti-government protesters, although he came second in that year's presidential election. Once elected in 2005, Morales increased taxation on the hydrocarbon industry to bolster social spending and emphasized projects to combat illiteracy, poverty, racism, and sexism. Vocally criticizing neoliberalism, Morales' government moved Bolivia towards a mixed economy, reduced its dependence on the World Bank and International Monetary Fund (IMF) and oversaw strong economic growth. Scaling back United States influence in the country, he built relationships with leftist governments in the Latin American pink tide — especially Hugo Chávez's Venezuela and Fidel Castro's Cuba — and signed Bolivia into the Bolivarian Alliance for the Americas. His administration opposed the autonomist demands of Bolivia's eastern provinces, won a 2008 recall referendum, and instituted a new constitution that established Bolivia as a plurinational state. Re-elected in 2009 and 2014, he oversaw Bolivia's admission to the Bank of the South and Community of Latin American and Caribbean States although his popularity was dented by attempts to abolish presidential term limits. Following the disputed 2019 general election and the ensuing unrest, Morales agreed to calls for his resignation, after which he went into temporary exile. He returned the year later after the election of ally Luis Arce. He continues to lead his party. He has been lauded as a champion of indigenous rights, anti-imperialism, and environmentalism, as well as credited with achieving large amounts of economic growth and poverty reduction while also facing accusations that his defence of coca contributed to illegal cocaine production and that his calls for domestic protest represented sedition and terrorism. 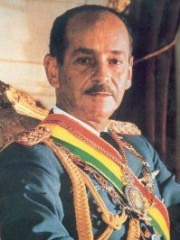 With an HPI of 67.31, Hugo Banzer is the 2nd most famous Bolivian Politician.  His biography has been translated into 31 different languages. 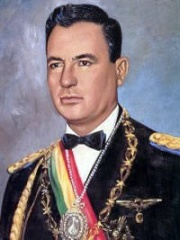 With an HPI of 66.98, René Barrientos is the 3rd most famous Bolivian Politician.  His biography has been translated into 29 different languages.

René Barrientos Ortuño (30 May 1919 – 27 April 1969) was a Bolivian military officer and politician who served as the 47th President of Bolivia twice nonconsecutively from 1964 to 1966 and from 1966 to 1969. During much of his first term, he shared power as co-president with Alfredo Ovando from 1965 to 1966 and prior to that served as the 30th Vice President of Bolivia in 1964.General Barrientos came to power after the 1964 Bolivian coup d'état which overthrew the government of Paz Estenssoro. During his three-year rule, Barrientos and the army suppressed leftist opposition to his regime, including a guerrilla group led by Che Guevara in 1967. 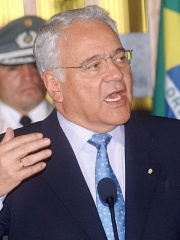 With an HPI of 65.79, Gonzalo Sánchez de Lozada is the 4th most famous Bolivian Politician.  His biography has been translated into 30 different languages.

Gonzalo Sánchez de Lozada Sánchez Bustamante (born 1 July 1930), familiarly known as "Goni", is a Bolivian politician and businessman, who served as the 61st President of Bolivia for two nonconsecutive terms from 1993 to 1997 and from 2002 to 2003. He is a lifelong member of the Revolutionary Nationalist Movement (Movimiento Nacionalista Revolucionario, MNR). As Minister of Planning in the government of President Víctor Paz Estenssoro, Sánchez de Lozada used "shock therapy" in 1985 to cut hyperinflation from an estimated 25,000% to a single digit within a period of less than 6 weeks. Sánchez de Lozada was twice elected President of Bolivia, both times on the MNR ticket. During his first term (1993–1997), he initiated a series of landmark social, economic and constitutional reforms. Elected to a second term in 2002, he struggled with protests and events in October 2003 related to the Bolivian gas conflict. According to official reports, 59 protestors, 10 soldiers and 16 policemen died in confrontations. As a result of the violent clashes, Sánchez de Lozada resigned and went into exile in the United States. In March 2006, he resigned the leadership of the MNR.The former government of Evo Morales unsuccessfully sought his extradition from the US to stand a political trial for the events of 2003. Victims' representatives have pursued compensatory damages for extrajudicial killings in a suit against him in the United States under the Alien Tort Statute (ATS). In 2014, the US District Court in Florida ruled the case could proceed under the Torture Victim Protection Act (TVPA). The trial, which began on 5 March 2018 and concluded on 30 May 2018, found Sánchez de Lozada and his former defense minister Carlos Sanchez Berzaín not liable for the civilian deaths after the judge declared that there was "insufficient evidence" to do so. Nevertheless, on 3 August 2020, the 11th Circuit Court of Appeals vacated this ruling. 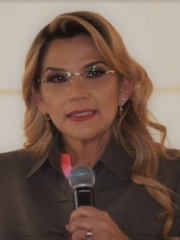 With an HPI of 65.17, Jeanine Áñez is the 5th most famous Bolivian Politician.  Her biography has been translated into 45 different languages.

Jeanine Áñez Chávez (Spanish pronunciation: [ɟʝaˈnine ˈaɲes]; born 13 June 1967) is a Bolivian politician and lawyer who served as the 66th President of Bolivia on an interim basis from 2019 to 2020, following the resignation of President Evo Morales after the disputed 2019 Bolivian general election. She is Bolivia's second female president after Lidia Gueiler Tejada. Áñez was previously an opposition senator from the northeastern department of Beni, belonging to the center-right Democrat Social Movement, which belongs to the Democratic Unity (UD) coalition of parties in Bolivia's legislative assemblies. From January to September 2020, she ran for president as part of the "Juntos Avancemos" alliance, a coalition of the Democrat Social Movement party and four other parties. She is a strong critic of former president Morales. 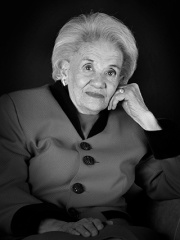 With an HPI of 64.33, Lidia Gueiler Tejada is the 6th most famous Bolivian Politician.  Her biography has been translated into 29 different languages.

Lidia Gueiler Tejada (28 August 1921 – 9 May 2011) was a Bolivian politician who served as the 56th President of Bolivia on an interim basis from 1979 to 1980. She was Bolivia's first female Head of State, and the second in the history of the Americas (the first was Isabel Perón in Argentina between 1974 and 1976). She was the cousin of American actress Raquel Welch. 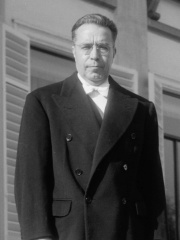 With an HPI of 64.20, Víctor Paz Estenssoro is the 7th most famous Bolivian Politician.  His biography has been translated into 31 different languages. 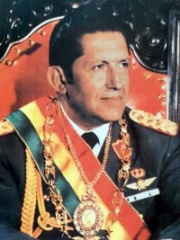 With an HPI of 64.08, Luis García Meza is the 8th most famous Bolivian Politician.  His biography has been translated into 22 different languages.

Luis García Meza Tejada (8 August 1929 – 29 April 2018) was a Bolivian general who served as the de facto 57th President of Bolivia from 1980 to 1981. He was a dictator convicted of human rights violations and leader of a violent coup. A native of La Paz, he was a career military officer who rose to the rank of general during the dictatorship of Hugo Banzer (1971–78). 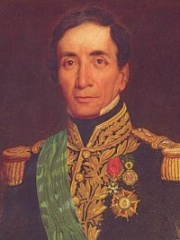 With an HPI of 63.86, Andrés de Santa Cruz is the 9th most famous Bolivian Politician.  His biography has been translated into 24 different languages.

Andrés de Santa Cruz y Calahumana (Spanish pronunciation: [anˈdɾes ðe ˈsanta kɾuθ] (listen); 5 December 1792 – 25 September 1865) was a general and politician who served as the 7th President of Peru in 1827, the Interim President of Peru from 1836 to 1838 and the 6th President of Bolivia from 1829 to 1839. He also served as Supreme Protector of the short-lived Peru-Bolivian Confederation from 1836 to 1839, a political entity created mainly by his personal endeavors. 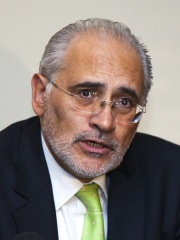 With an HPI of 62.14, Carlos Mesa is the 10th most famous Bolivian Politician.  His biography has been translated into 32 different languages.

Carlos Diego Mesa Gisbert (born 12 August 1953) is a Bolivian historian and politician who served as the 63rd President of Bolivia from 2003 to 2005. He was the 37th Vice President of Bolivia from 2002 to 2003. Mesa previously had been a television journalist. His widespread recognition prompted the MNR candidate Gonzalo Sánchez de Lozada to pick him as running mate in the 2002 Bolivian presidential elections. The winning ticket of Sánchez-Mesa took office August 6, 2002. Soon after becoming vice president, a wave of protests and strikes shut down Bolivia in a bitter dispute known as the Bolivian Gas War. The government's repression of said demonstrations eventually lead Mesa to withdraw support for Sánchez de Lozada, whose resignation put Mesa forward as president. Mesa's presidency was marked by a continuation of the Bolivian gas crisis and the delicate sociopolitical status it created. Mesa resigned on June 9, 2005 amid heavy dissatisfaction with his government and pressure from labor unions, coca activists, members of the Santa Cruz autonomist movement, citizen protest, and the growing MAS-IPSP party, figure-headed by future president Evo Morales.After his presidency, Mesa was a spokesman for Bolivia in the Obligation to Negotiate Access to the Pacific Ocean case in the International Court of Justice, which was ultimately unsuccessful.Mesa has attempted to be elected president of the Plurinational State of Bolivia in his own right, running for the centre-left alliance Civic Community (CC), in both 2019 and 2020. The 2019 election, in which Mesa came second place to President Morales, was annulled after widespread allegations of fraud. In the 2020 election, Mesa lost to Luis Arce, to whom he conceded defeat without challenging the results of the election and calling the CC coalition to lead the Bolivian opposition.Mesa is a member of the Inter-American Dialogue.