This page contains a list of the greatest Russian Fencers. The pantheon dataset contains 174 Fencers, 33 of which were born in Russia. This makes Russia the birth place of the 4th most number of Fencers behind Italy and Hungary.

The following people are considered by Pantheon to be the top 10 most legendary Russian Fencers of all time. This list of famous Russian Fencers is sorted by HPI (Historical Popularity Index), a metric that aggregates information on a biography’s online popularity. Visit the rankings page to view the entire list of Russian Fencers. 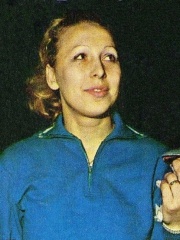 With an HPI of 50.32, Elena Belova is the most famous Russian Fencer.  Her biography has been translated into 25 different languages on wikipedia.

‹See Tfd› Elena Dmitriyevna Novikova-Belova (Russian: Елена Дмитриевна Новикова-Белова, née Novikova, born 28 July 1947) is a retired Russian foil fencer. She competed at the 1968, 1972, 1976 and 1980 Olympics in the individual and team events and won four gold, one silver and one bronze medal, becoming the first female fencer to win four Olympic gold medals. She nearly won a fifth gold in 1976, but lost her last pool match to the last-placed fencer. Belova also won eight world titles, individually in 1969, and with the Soviet team in 1970–1979.Shortly before the 1968 Olympics she married Vyacheslav Belov, a future world champion in modern pentathlon, and changed her last name from Novikova to Belova. She retired after the 1980 Olympics, and gave birth in 1987, aged 40. Her second husband, composer Valery Ivanov, devoted a waltz to her.In 1970 Belova graduated from the Minsk institute of Pedagogy, she holds a PhD in this discipline. In 1997 she was awarded the Olympic Order in Silver, and in 2007 the Pierre de Coubertin Medal. On 14 May 2021, Jovian asteroid 24426 Belova, discovered by astronomers with the LINEAR program in 2000, was named in her honor. 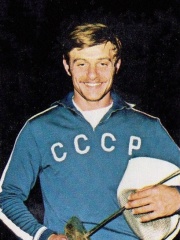 With an HPI of 46.05, Viktor Sidyak is the 2nd most famous Russian Fencer.  His biography has been translated into 17 different languages.

Viktor Alexandrovich Sidyak (Russian: Ви́ктор Алекса́ндрович Сидя́к; born 24 November 1943) is a Russian former left-handed sabre fencer, a pupil of Mark Rakita and David Tyshler. He was known for his aggressive style and the "one-and-a-half tempo attack". 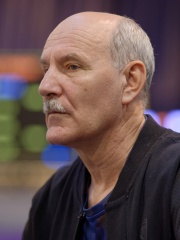 With an HPI of 45.31, Alexandr Romankov is the 3rd most famous Russian Fencer.  Her biography has been translated into 19 different languages.

Alexandr Anatolyevich Romankov (Belarusian: Аляксандр Анатольевіч Раманькоў, tr. Aljaksandr Anatol'evič Raman'koŭ; Russian: Александр Анатольевич Романьков, tr. Aleksandr Anatol’evich Roman’kov) is a former Belarusian fencer from the former Soviet Union, who was born on 7 November 1953 in the town of Korsakov on the island of Sakhalin (just north of Japan). He trained at Dynamo in Minsk and won a gold medal, two silver medals and two bronze medals at the three Olympic Games that he competed in between 1976 and 1988.

With an HPI of 44.85, Viktor Zhdanovich is the 4th most famous Russian Fencer.  His biography has been translated into 20 different languages. 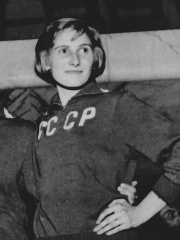 With an HPI of 43.65, Valentina Prudskova is the 5th most famous Russian Fencer.  Her biography has been translated into 16 different languages.

Valentina Aleksandrovna Prudskova (Russian: Валентина Александровна Прудскова; 27 December 1938 – 23 August 2020) was a Soviet fencer. She won gold in the women's team foil event at the 1960 Summer Olympics and a silver in the same event at the 1964 Summer Olympics.Prudskova's mother, Zinaida Nikolaevna Prudskova, was a farmer and housewife. Her father, Aleksandr Petrovich Prudskov, worked at railways and fought in the Winter War and World War II; he died of pneumonia in 1950, aged 40. Shortly after that, his family moved from Yershov to Saratov, where Prudskova started training in fencing, together with her cousin. Her career advanced in 1954 when she won her first national title.Prudskova was a member of the Soviet foil team from 1957 to 1966. During those years she won four gold and two silver team medals at the world championships, as well as one individual bronze. In 1962 she graduated from Saratov State Technical University with a degree in metal processing and then until 1969 worked at a metalworking plant in Saratov. After that she coached fencing at a sport school. She was awarded the Order of the Badge of Honour and Medal "For Labour Valour".Prudskova had a daughter, Marina, who worked as an arts teacher. 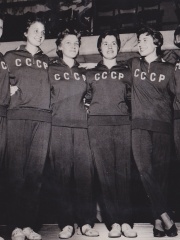 With an HPI of 43.30, Alexandra Zabelina is the 6th most famous Russian Fencer.  Her biography has been translated into 18 different languages.

Alexandra Ivanovna Zabelina (Russian: Александра Ивановна Забелина; 11 March 1937 – 27 March 2022) was a Soviet fencer. She won gold medals in the team foil at the 1960, 1968 and 1972 Summer Olympics.Between 1956 and 1971 Zabelina won eight team and two individual world titles in the foil. She won the individual Silver Prize at the 1961 and 1966 world championships and team Silver Prize in 1959, 1962, 1967, and 1969. She missed the 1964 Summer Olympics because she was expecting her son.Zabelina first trained in gymnastics, but had to quit due to an injury. In retirement she worked as a fencing coach. Her students included the Olympic champion Maria Mazina.

With an HPI of 41.91, Vladimir Nazlymov is the 7th most famous Russian Fencer.  His biography has been translated into 18 different languages.

With an HPI of 41.03, Umyar Mavlikhanov is the 8th most famous Russian Fencer.  His biography has been translated into 15 different languages. 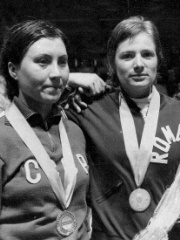 With an HPI of 41.00, Olga Knyazeva is the 9th most famous Russian Fencer.  Her biography has been translated into 20 different languages.

Olga Nikolaevna Knyazeva (Russian: Ольга Николаевна Князева; 9 August 1954 – 3 January 2015) was a Soviet foil fencer. She won a team gold medal at the 1976 Olympics and placed ninth individually. She also won four gold and two silver medals at the world championships between 1973 and 1978.Knyazeva took up fencing in 1966 and between 1972 and 1978, was a member of the Soviet national team. In 1975 she won the World Cup, the European Team Cup, and the team world title, and was named best female fencer of the year by the Fédération Internationale d'Escrime. After retiring from competitions she worked as a fencing coach in Kazan and taught physical education at the Kazan State Finance and Economics Institute.After the 1976 Olympics Knyazeva married Rafael Dubov, who was her childhood friend, a fellow fencer, and later a fencing coach and referee. Their children, son Aleksandr and daughter Nina, also competed in fencing.

With an HPI of 40.39, Viktor Krovopuskov is the 10th most famous Russian Fencer.  His biography has been translated into 21 different languages.

Viktor Alekseyevich Krovopuskov (Russian: Ви́ктор Алексе́евич Кровопу́сков; born 29 September 1948 in Moscow) is a retired sabre fencer, who competed for the USSR. Krovopuskov began fencing at age 13 at the Children and Youth Sport School in Moscow, his first trainer being Igor Chernyshev. In 1967 he joined the Armed Forces sports society in Moscow. He was a member of the USSR National Team between 1973 and 1986. At the 1976 Olympics he won gold medals in both the individual and team sabre events. He repeated his performance at the 1980 Summer Olympics, where he again won gold medals in both events.Krovopuskov was world champion in individual sabre twice (1978 and 1982), and team sabre five times (1974, 1975, 1979, 1983, and 1985). He also won the World Cup in sabre twice (1976 and 1979). In 1979 he was named the Best Sabre Fencer of the World by the International Fencing Federation.He was awarded the Order of the Red Banner of Labour in 1976 and the Order of Lenin in 1980.

Pantheon has 33 people classified as fencers born between 1937 and 1998. Of these 33, 29 (87.88%) of them are still alive today. The most famous living fencers include Elena Belova, Viktor Sidyak, and Alexandr Romankov. The most famous deceased fencers include Valentina Prudskova, Umyar Mavlikhanov, and Olga Knyazeva. As of April 2022, 12 new fencers have been added to Pantheon including Valentina Prudskova, Umyar Mavlikhanov, and Larisa Korobeynikova.

Which Fencers were alive at the same time? This visualization shows the lifespans of the 4 most globally memorable Fencers since 1700.