This page contains a list of the greatest American Explorers. The pantheon dataset contains 405 Explorers, 33 of which were born in United States. This makes United States the birth place of the 3rd most number of Explorers behind United Kingdom and Spain.

The following people are considered by Pantheon to be the top 10 most legendary American Explorers of all time. This list of famous American Explorers is sorted by HPI (Historical Popularity Index), a metric that aggregates information on a biography’s online popularity. Visit the rankings page to view the entire list of American Explorers. 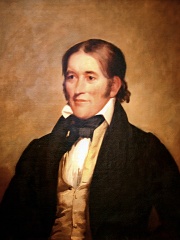 With an HPI of 71.78, Davy Crockett is the most famous American Explorer.  His biography has been translated into 39 different languages on wikipedia.

David Crockett (August 17, 1786 – March 6, 1836) was an American folk hero, frontiersman, soldier, and politician. He is commonly referred to in popular culture by the epithet "King of the Wild Frontier". He represented Tennessee in the U.S. House of Representatives and served in the Texas Revolution. Crockett grew up in East Tennessee, where he gained a reputation for hunting and storytelling. He was made a colonel in the militia of Lawrence County, Tennessee and was elected to the Tennessee state legislature in 1821. In 1827, he was elected to the U.S. Congress where he vehemently opposed many of the policies of President Andrew Jackson, especially the Indian Removal Act. Crockett's opposition to Jackson's policies led to his defeat in the 1831 elections. He was re-elected in 1833, then narrowly lost in 1835, prompting his angry departure to Texas (then the Mexican state of Tejas) shortly thereafter. In early 1836, he took part in the Texas Revolution and was likely executed at the Battle of the Alamo after being captured by the Mexican Army.Crockett became famous during his lifetime for larger-than-life exploits popularized by stage plays and almanacs. After his death, he continued to be credited with acts of mythical proportion. These led in the 20th century to television and film portrayals, and he became one of the best-known American folk heroes. 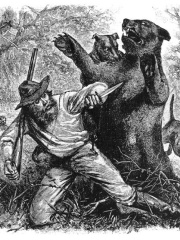 With an HPI of 71.53, Hugh Glass is the 2nd most famous American Explorer.  His biography has been translated into 25 different languages.

Hugh Glass (c. 1783 – 1833) was an American frontiersman, fur trapper, trader, hunter, and explorer. He is best known for his story of survival and forgiveness after being left for dead by companions when he was mauled by a grizzly bear. No records exist regarding his origins but he is widely said to have been born in Pennsylvania to Irish, possibly Scots-Irish, parents. Glass became an explorer of the watershed of the Upper Missouri River, in present-day Montana, the Dakotas, and the Platte River area of Nebraska. His life story has been the basis of two feature-length films: Man in the Wilderness (1971) and The Revenant (2015). They both portray the survival struggle of Glass, who (in the best historical accounts) crawled and stumbled 200 miles (320 km) to Fort Kiowa, South Dakota, after being abandoned without supplies or weapons by fellow explorers and fur traders during General Ashley's expedition of 1823. Another version of the story was told in a 1966 episode of the TV series Death Valley Days, titled "Hugh Glass Meets the Bear". Despite the story's popularity, its accuracy has been disputed. It was first recorded in 1825 in The Port Folio, a Philadelphia literary journal, as a literary piece and later picked up by various newspapers. Although originally published anonymously, it was later revealed to be the work of James Hall, brother of The Port Folio's editor. There is no writing from Hugh Glass himself to corroborate the veracity of it. Also, it is likely to have been embellished over the years as a legend. 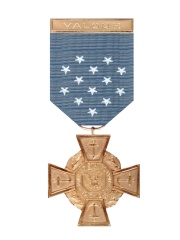 With an HPI of 71.16, Richard E. Byrd is the 3rd most famous American Explorer.  His biography has been translated into 45 different languages.

Rear Admiral Richard Evelyn Byrd Jr. (October 25, 1888 – March 11, 1957) was an American naval officer and explorer. He was a recipient of the Medal of Honor, the highest honor for valor given by the United States, and was a pioneering American aviator, polar explorer, and organizer of polar logistics. Aircraft flights in which he served as a navigator and expedition leader crossed the Atlantic Ocean, a segment of the Arctic Ocean, and a segment of the Antarctic Plateau. Byrd claimed that his expeditions had been the first to reach both the North Pole and the South Pole by air. His claim to have reached the North Pole is disputed. He is also known for discovering Mount Sidley, the largest dormant volcano in Antarctica. 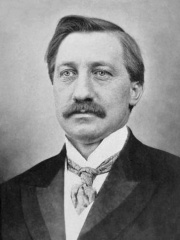 With an HPI of 70.66, Frederick Cook is the 4th most famous American Explorer.  His biography has been translated into 30 different languages.

Frederick Albert Cook (June 10, 1865 – August 5, 1940) was an American explorer, physician, and ethnographer who claimed to have reached the North Pole on April 21, 1908. That was nearly a year before Robert Peary, who similarly claimed to have reached the North Pole on April 6, 1909. Both men's accounts have been disputed ever since. His expedition was the first, and the only one with a United States national, to find a previously unknown, to people of European descent, North American Arctic island, Meighen Island. In December 1909, after reviewing Cook's limited records, a commission of the University of Copenhagen ruled his claim unproven. In 1911, Cook published a memoir of his expedition that continued his claim. His account of reaching the summit of Denali (Mount McKinley) in Alaska has been discredited. 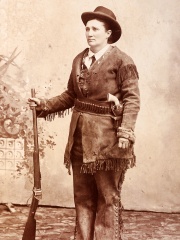 With an HPI of 70.35, Calamity Jane is the 5th most famous American Explorer.  Her biography has been translated into 26 different languages.

Martha Jane Cannary (May 1, 1852 – August 1, 1903), better known as Calamity Jane, was a well-known American frontierswoman, sharpshooter, and raconteur. In addition to many exploits she was known for being an acquaintance of Wild Bill Hickok. Late in her life, she appeared in Buffalo Bill's Wild West show and at the 1901 Pan-American Exposition. She is said to have exhibited compassion to others, especially to the sick and needy. This facet of her character contrasted with her daredevil ways and helped to make her a noted frontier figure. She was also known for her habit of wearing men's attire. 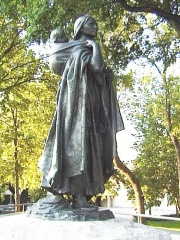 With an HPI of 70.17, Sacagawea is the 6th most famous American Explorer.  Her biography has been translated into 41 different languages.

Sacagawea ( or ; also spelled Sakakawea or Sacajawea; May c. 1788 – December 20, 1812 or April 9, 1884) was a Lemhi Shoshone woman who, at age 16, helped the Lewis and Clark Expedition in achieving their chartered mission objectives by exploring the Louisiana Territory. Sacagawea traveled with the expedition thousands of miles from North Dakota to the Pacific Ocean, helping to establish cultural contacts with Native American populations and contributing to the expedition's knowledge of natural history in different regions. The National American Woman Suffrage Association of the early 20th century adopted her as a symbol of women's worth and independence, erecting several statues and plaques in her memory, and doing much to recount her accomplishments. 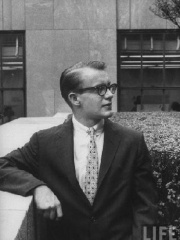 With an HPI of 67.00, Michael Rockefeller is the 7th most famous American Explorer.  His biography has been translated into 19 different languages.

Michael Clark Rockefeller (May 18, 1938 – presumed to have died November 19, 1961) was the fifth child of New York Governor and future U.S. Vice President Nelson Rockefeller, and a fourth-generation member of the Rockefeller family. He disappeared during an expedition in the Asmat region of southwestern Netherlands New Guinea, which is now a part of the Indonesian province of Papua. In 2014, Carl Hoffman published a book that went into detail about the inquest into his killing, in which villagers and tribal elders admit to Rockefeller being killed after he swam to shore in 1961. No remains or physical proof of Rockefeller's death have been discovered. 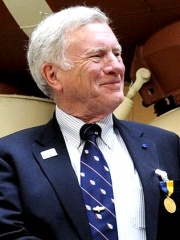 With an HPI of 65.40, Don Walsh is the 8th most famous American Explorer.  His biography has been translated into 22 different languages.

Don Walsh (born November 2, 1931) is an American oceanographer, explorer and marine policy specialist. He and Jacques Piccard were aboard the bathyscaphe Trieste when it made a record maximum descent into the Challenger Deep on January 23, 1960, the deepest point of the world's oceans. The depth was measured at 35,813 feet (10,916 m), but later and more accurate measurements have measured it at 35,798 feet (10,911 m). 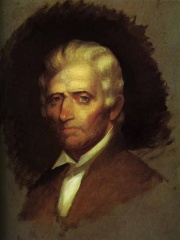 With an HPI of 65.32, Daniel Boone is the 9th most famous American Explorer.  His biography has been translated into 29 different languages.

Daniel Boone (November 2, 1734 [O.S. October 22] – September 26, 1820) was an American pioneer and frontiersman whose exploits made him one of the first folk heroes of the United States. Boone became famous for his exploration and settlement of what is now Kentucky, which was then beyond the western borders of the Thirteen Colonies. Despite resistance from American Indians, for whom Kentucky was a traditional hunting ground, in 1775 Boone blazed the Wilderness Road through the Cumberland Gap and into Kentucky. There he founded Boonesborough, one of the first English-speaking settlements west of the Appalachian Mountains. By the end of the 18th century, more than 200,000 people had entered Kentucky by following the route marked by Boone.Boone served as a militia officer during the Revolutionary War (1775–1783), which, in Kentucky, was fought primarily between American settlers and British-allied American Indians. Boone was captured by Shawnees in 1778 and adopted into the tribe, but he escaped and continued to help defend the Kentucky settlements. He was elected to the first of his three terms in the Virginia General Assembly during the war, and fought in the Battle of Blue Licks in 1782, one of the last battles of the American Revolution. Boone worked as a surveyor and merchant after the war, but he went deep into debt as a Kentucky land speculator. Frustrated with legal problems resulting from his land claims, in 1799 Boone resettled in Missouri, where he spent most of the last two decades of his life. Boone remains an iconic, if imperfectly remembered, figure in American history. He was a legend in his own lifetime, especially after an account of his adventures was published in 1784, making him famous in America and Europe. After his death, Boone became the subject of many heroic tall tales and works of fiction. His adventures—real and legendary—helped create the archetypal frontier hero of American folklore. In American popular culture, Boone is remembered as one of the foremost early frontiersmen, even though mythology often overshadows the historical details of his life. 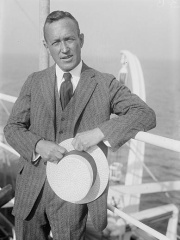 With an HPI of 65.28, Lincoln Ellsworth is the 10th most famous American Explorer.  His biography has been translated into 28 different languages.

Lincoln Ellsworth (May 12, 1880 – May 26, 1951) was a polar explorer from the United States and a major benefactor of the American Museum of Natural History.

Which Explorers were alive at the same time? This visualization shows the lifespans of the 25 most globally memorable Explorers since 1700.