This page contains a list of the greatest Ukrainian Engineers. The pantheon dataset contains 323 Engineers, 10 of which were born in Ukraine. This makes Ukraine the birth place of the 8th most number of Engineers behind Italy and Poland. 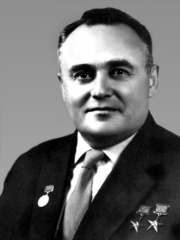 With an HPI of 70.33, Sergei Korolev is the most famous Ukrainian Engineer.  His biography has been translated into 64 different languages on wikipedia.

Sergei Pavlovich Korolev (Russian: Сергей Павлович Королёв, romanized: Sergey Pavlovich Korolyov, lit. 'sʲɪrˈɡʲej ˈpavləvʲɪtɕ kərɐˈlʲɵf'; Ukrainian: Сергій Павлович Корольов, romanized: Serhiy Pavlovych Korol'ov, pronounced [serˈɦij ˈpɑu̯lowɪtʃ koroˈlʲɔu̯]; 12 January 1907 [O.S. 30 December 1906] – 14 January 1966) was a lead Soviet rocket engineer and spacecraft designer during the Space Race between the United States and the Soviet Union in the 1950s and 1960s. He is regarded by many as the father of practical astronautics. He was involved in the development of the R-7 Rocket, Sputnik 1, launching Laika, Sputnik 3, the first human-made object to make contact with another celestial body, Belka and Strelka, the first human being, Yuri Gagarin, into space, Voskhod 1, and the first person, Alexei Leonov, to conduct a spacewalk.Although Korolev trained as an aircraft designer, his greatest strengths proved to be in design integration, organization and strategic planning. Arrested on a false official charge as a "member of an anti-Soviet counter-revolutionary organization" (which would later be reduced to "saboteur of military technology"), he was imprisoned in 1938 for almost six years, including a few months in a Kolyma labour camp. Following his release he became a recognized rocket designer and a key figure in the development of the Soviet Intercontinental ballistic missile program. He later directed the Soviet space program and was made a Member of Soviet Academy of Sciences, overseeing the early successes of the Sputnik and Vostok projects including the first human Earth orbit mission by Yuri Gagarin on 12 April 1961. Korolev's unexpected death in 1966 interrupted implementation of his plans for a Soviet crewed Moon landing before the United States 1969 mission. Before his death he was officially identified only as Glavny Konstruktor (Главный Конструктор), or the Chief Designer, to protect him from possible Cold War assassination attempts by the United States. Even some of the cosmonauts who worked with him were unaware of his last name; he only went by Chief Designer. Only following his death in 1966 was his identity revealed and he received the appropriate public recognition as the driving force behind Soviet accomplishments in space exploration during and following the International Geophysical Year. 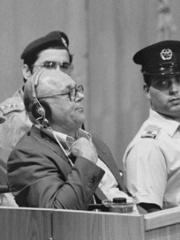 With an HPI of 65.37, John Demjanjuk is the 2nd most famous Ukrainian Engineer.  His biography has been translated into 33 different languages.

John Demjanjuk (born Ivan Mykolaiovych Demjanjuk; Ukrainian: Іван Миколайович Дем'янюк; 3 April 1920 – 17 March 2012) was a Ukrainian-American who served as a Trawniki man and Nazi camp guard at Sobibor extermination camp, Majdanek, and Flossenbürg. Demjanjuk became the center of global media attention in the 1980s, when he was tried and convicted in Israel after being misidentified as Ivan the Terrible, a notoriously cruel watchman at Treblinka extermination camp. In 1993 the verdict was overturned. Shortly before his death, he was tried and convicted in Germany as an accessory to 28,060 murders at Sobibor. Born in Soviet Ukraine, Demjanjuk was conscripted into the Red Army in 1940. He fought in World War II and was taken prisoner by the Germans in spring 1942. He was recruited by the Germans and trained at Trawniki concentration camp, going on to serve at Sobibor extermination camp and at least two concentration camps. After the war he married a woman he met in a West German displaced persons camp, and emigrated with her and their daughter to the United States. They settled in Seven Hills, Ohio, where he worked in an auto factory and raised three children. Demjanjuk became a US citizen in 1958. In August 1977, Demjanjuk was accused of having been a Trawniki man. Based on eyewitness testimony by Holocaust survivors in Israel, he was identified as the notorious Treblinka extermination camp guard known as "Ivan the Terrible." Demjanjuk was extradited to Israel in 1986 for trial. In 1988, Demjanjuk was convicted and sentenced to death. He maintained his innocence, claiming that it was a case of mistaken identity. In 1993 the verdict was overturned by the Israeli Supreme Court, based on new evidence that cast reasonable doubt over his identity as "Ivan the Terrible." Although the judges agreed that there was sufficient evidence to show that Demjanjuk had served at Sobibor, Israel declined to prosecute. In September 1993 Demjanjuk was allowed to return to Ohio. In 1999, US prosecutors again sought to deport Demjanjuk for having been a concentration camp guard, and his citizenship was revoked in 2002. In 2009, Germany requested his extradition for over 27,900 counts of acting as an accessory to murder: one for each person killed at Sobibor during the time when he was alleged to have served there as a guard. He was deported from the US to Germany in that same year. On 12 May 2011, he was convicted and sentenced to five years in prison. According to legal scholar Lawrence Douglas, in spite of serious missteps along the way, the German verdict brought the case "to a worthy and just conclusion." After the conviction, Demjanjuk was released pending appeal. He lived at a German nursing home in Bad Feilnbach, where he died on 17 March 2012. Having died before a final judgment on his appeal could be issued, under German law, Demjanjuk remains technically innocent. In January 2020, a photograph album by Sobibor guard Johann Niemann was made public; some historians have suggested that a guard who appears in two photos may be Demjanjuk. 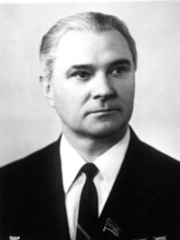 With an HPI of 59.63, Valentin Glushko is the 3rd most famous Ukrainian Engineer.  His biography has been translated into 38 different languages. 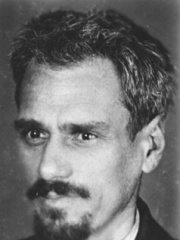 With an HPI of 57.66, Yuri Kondratyuk is the 4th most famous Ukrainian Engineer.  His biography has been translated into 27 different languages.

Yuri Vasilyevich Kondratyuk (Russian: Юрий Васильевич Кондратюк; Ukrainian: Юрій Васильович Кондратюк; 21 June 1897 – February 1942), real name Aleksandr Ignatyevich Shargei (Russian: Алекса́ндр Игна́тьевич Шарге́й; Ukrainian: Олександр Гнатович Шаргей) was a Soviet engineer and mathematician. He was a pioneer of astronautics and spaceflight, a theoretician and a visionary who, in the early 20th century, developed the first known lunar orbit rendezvous (LOR), a key concept for landing and return spaceflight from Earth to the Moon. The LOR was later used for the plotting of the first actual human spaceflight to the Moon. Many other aspects of spaceflight and space exploration are covered in his works. Kondratyuk made his scientific discoveries in circumstances of war (including both World Wars and the Russian Civil War), continuous persecutions from authorities and serious illnesses. In fact, "Yuri Kondratyuk", the name under which he became known both in Russia and abroad, was a stolen identity he assumed in 1921 for his own protection. 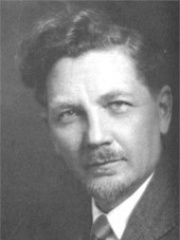 With an HPI of 57.08, Stephen Timoshenko is the 5th most famous Ukrainian Engineer.  His biography has been translated into 21 different languages.

Stepan Prokofyevich Timoshenko (Russian: Степан Прокофьевич Тимошенко; Ukrainian: Степан Прокопович Тимошенко, romanized: Stepan Prokopovych Tymoshenko; December 22 [O.S. December 10] 1878 – May 29, 1972), later known as Stephen Timoshenko, was a Russian Imperial and later, an American engineer and academician of Ukrainian descent. He is considered to be the father of modern engineering mechanics. An inventor and one of the pioneering mechanical engineers at the St. Petersburg Polytechnic University. A founding member of the Ukrainian Academy of Sciences, Timoshenko wrote seminal works in the areas of engineering mechanics, elasticity and strength of materials, many of which are still widely used today. Having started his scientific career in the Russian Empire, Timoshenko emigrated to the Kingdom of Serbs, Croats and Slovenes during the Russian Civil War and then to the United States. 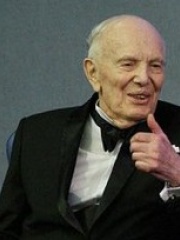 With an HPI of 54.95, Borys Paton is the 6th most famous Ukrainian Engineer.  His biography has been translated into 27 different languages.

Borys Yevhenovych Paton (Ukrainian: Бори́с Євге́нович Пато́н, Russian: Борис Евгеньевич Патон; 27 November 1918 – 19 August 2020) was a Ukrainian scientist and a long-time chairman of the National Academy of Sciences of Ukraine. He was appointed to this post in 1962 and held it until his death. Paton, like his father Evgeny Paton, was famous for his works in electric welding. 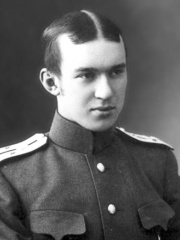 With an HPI of 51.94, Dmitry Dmitrievich Maksutov is the 7th most famous Ukrainian Engineer.  His biography has been translated into 24 different languages. 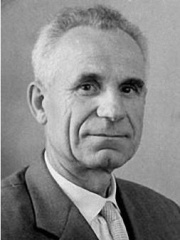 With an HPI of 49.73, Arkhip Lyulka is the 8th most famous Ukrainian Engineer.  His biography has been translated into 17 different languages. 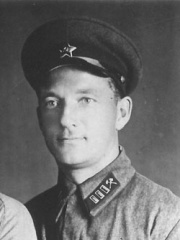 With an HPI of 47.95, Georgy Langemak is the 9th most famous Ukrainian Engineer.  His biography has been translated into 15 different languages.

Georgy Erikhovich Langemak (Russian: Георгий Эрихович Лангемак; 8 July [O.S. 26 June] 1898 – 11 January 1938) was a Soviet engineer in the Soviet space program, working on rocket design applications. He is chiefly remembered for being the co-designer and directing the development of the aircraft unguided rockets, such as the RS-82 and RS-132, which were modified to be used with such success in the Katyusha rocket launchers of World War II. The crater Langemak on the Moon is named in his honor. 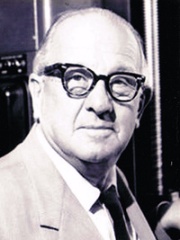 With an HPI of 46.88, Markus Reiner is the 10th most famous Ukrainian Engineer.  His biography has been translated into 16 different languages.

Pantheon has 10 people classified as engineers born between 1878 and 1920. Of these 10, none of them are still alive today. The most famous deceased engineers include Sergei Korolev, John Demjanjuk, and Valentin Glushko. As of April 2022, 1 new engineers have been added to Pantheon including Georgy Langemak.

Which Engineers were alive at the same time? This visualization shows the lifespans of the 9 most globally memorable Engineers since 1700.