This page contains a list of the greatest Spanish Cyclists. The pantheon dataset contains 1,214 Cyclists, 123 of which were born in Spain. This makes Spain the birth place of the 3rd most number of Cyclists behind France and Italy.

The following people are considered by Pantheon to be the top 10 most legendary Spanish Cyclists of all time. This list of famous Spanish Cyclists is sorted by HPI (Historical Popularity Index), a metric that aggregates information on a biography’s online popularity. Visit the rankings page to view the entire list of Spanish Cyclists. 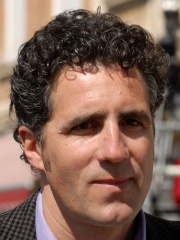 With an HPI of 57.22, Miguel Induráin is the most famous Spanish Cyclist.  His biography has been translated into 56 different languages on wikipedia.

Miguel Induráin Larraya (Spanish pronunciation: [miˈɣel induˈɾajn laˈraʝa]; born 16 July 1964) is a retired Spanish road racing cyclist. Induráin won five Tours de France from 1991 to 1995, the fourth, and last, to win five times, and the only five-time winner to achieve those victories consecutively.He won the Giro d'Italia twice, becoming one of seven people to achieve the Giro-Tour double in the same season. He wore the race leader's yellow jersey in the Tour de France for 60 days. Since the revoking of Lance Armstrong's seven wins, he now holds the record for the most consecutive Tour de France wins and shares the record for most wins with Jacques Anquetil, Bernard Hinault and Eddy Merckx. He is the most recent cyclist, and one of the very few cyclists, to have come close to cycling's 'Triple Crown' when in 1993, after having already won the Giro and the Tour, he finished just 0:19 behind in the World Championship. Induráin's ability and physical size—1.86 m (6 ft 1 in) and 76 kilograms (168 lb)—earned him the nickname "Miguelón" or "Big Mig". He was the youngest rider ever to win the Spanish amateur national road championship, when he was 18, at 20 the youngest rider to lead the Vuelta a España, and at 20 he won a stage of the Tour de l'Avenir. 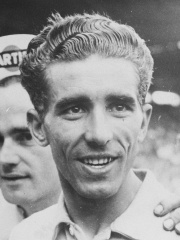 With an HPI of 55.96, Federico Bahamontes is the 2nd most famous Spanish Cyclist.  His biography has been translated into 26 different languages.

Federico Martín Bahamontes, born Alejandro Martín Bahamontes (pronounced [feðeˈɾiko maɾˈtin βa.a.ˈmon.tes]; born 9 July 1928), is a Spanish former professional road racing cyclist. He won the 1959 Tour de France and a total of 11 Grand Tour stages between 1954-1965. He won a total of 9 mountain classifications and was the first cyclist to complete a "career triple" by winning the mountain classification in all three Grand Tours. Following his retirement, Bahamontes ran a bicycle and motorcycle shop and was named the best climber in the history of the Tour de France by a panel organised by L'Équipe in 2013. 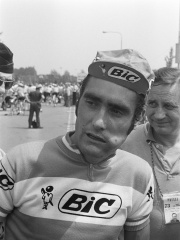 With an HPI of 55.08, Luis Ocaña is the 3rd most famous Spanish Cyclist.  His biography has been translated into 28 different languages.

Jesús Luis Ocaña Pernía (pronounced [xeˈsus ˈlwis oˈkaɲa peɾˈnia]; 9 June 1945 – 19 May 1994) was a Spanish road bicycle racer who won the 1973 Tour de France and the 1970 Vuelta a España. During the 1971 Tour de France he launched an amazing solo breakaway that put him into the Yellow Jersey and stunned the rest of the main field, including back to back Tour champion Eddy Merckx, but abandoned in the fourteenth stage after a crash on the descent of the Col de Menté. Ocaña would abandon as many Tours as he entered, but he finished every Vuelta a España he entered except for his first, and finished in the top 5 seven times in a row. 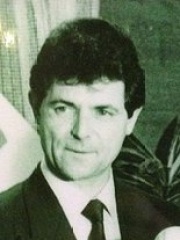 With an HPI of 50.52, José Manuel Fuente is the 4th most famous Spanish Cyclist.  His biography has been translated into 18 different languages.

José Manuel Fuente Lavandera (September 30, 1945 in Limanes, Spain – July 18, 1996 in Oviedo, Spain) was a professional road racing cyclist and noted climbing specialist. Fuente was a professional from 1970 to 1976. He had the same nickname as his father and grandfather, which was "El Tarangu", a word in the Asturian language for a man reputed for his strength and character. Fuente was known as one of the greatest climbers of his generation. He was a two-time winner of the Vuelta a España and won four consecutive climbers classification (or King of the Mountains) at the Giro d'Italia. He was rivals with the great cyclists of his time: Eddy Merckx and Luis Ocaña. He won the Vuelta a España in 1972, which at that time was held in late April and early May. Several weeks later, in the 1972 Giro d'Italia, Fuente had a great battle with Eddy Merckx. Fuente took the pink jersey as leader of the general classification early on in the race but Merckx took it back. On the mountain stage to Bardonecchia, Fuente put in an attack that put pressure on Merckx. Little by little, Merckx increased his pace and came back to Fuente and ended up winning the stage.Health problems due to kidney disease forced Fuente to retire in 1975. After retirement he opened a successful cycle business in Oviedo and in 1988 was appointed directeur sportif of the CLAS team. This lasted only a year, after which he was replaced in 1989 by Juan Fernadez. Fuente died following a long battle with kidney disease at the age of 50. 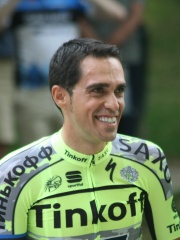 With an HPI of 50.39, Alberto Contador is the 5th most famous Spanish Cyclist.  His biography has been translated into 62 different languages.

Alberto Contador Velasco (Spanish pronunciation: [alˈβeɾto kontaˈðoɾ βeˈlasko]; born 6 December 1982) is a Spanish former professional cyclist. He is one of the most successful riders of his era, winning the Tour de France twice (2007, 2009), the Giro d'Italia twice (2008, 2015), and the Vuelta a España three times (2008, 2012, 2014). He is one of only seven riders to have won all three Grand Tours of cycling, and one of only two riders to have won all three more than once. He has also won the Vélo d'Or a record 4 times. He was regarded as the natural successor of Lance Armstrong and won the 2007 Tour de France with the Discovery Channel team. During his time at the Astana team, he won the 2008 Giro d'Italia, the 2008 Vuelta a España and the 2009 Tour de France. Between 2007 and 2011 he won six consecutive Grand Tours that he entered. This included winning the 2010 Tour de France with Astana, although it later emerged that he had tested positive for clenbuterol during the race. After a long battle in court, he was suspended by the Court of Arbitration for Sport and stripped of his 2010 Tour and 2011 Giro wins.Contador was known as an attacking rider who excelled as a climber, and on his best days was also an excellent time-trialist. He was also known for being able to turn races around to his favour, most notably during the Fuente Dé stage at the 2012 Vuelta a España. Following his return from suspension, he won the Vuelta twice and the Giro once more. On the penultimate day of his career, he won a stage victory at the mountaintop finish of the Alto de l'Angliru. 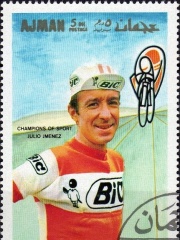 With an HPI of 49.39, Julio Jiménez is the 6th most famous Spanish Cyclist.  His biography has been translated into 19 different languages. 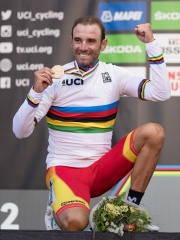 With an HPI of 48.43, Alejandro Valverde is the 7th most famous Spanish Cyclist.  His biography has been translated into 36 different languages. 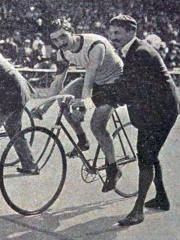 With an HPI of 47.51, Fernand Sanz is the 8th most famous Spanish Cyclist.  His biography has been translated into 17 different languages.

Fernando "Fernand" Sanz y Martínez de Arizala (28 February 1881 – 8 January 1925) was a Spanish-born, naturalized French citizen, younger of two illegitimate sons of Alfonso XII, King of Spain, and his mistress, Elena Sanz.He was also a racing cyclist who competed in the late 19th century and early 20th century; he participated in cycling at the 1900 Summer Olympics in Paris for France, and there won the silver medal in the men's sprint. Georges Taillandier won gold. 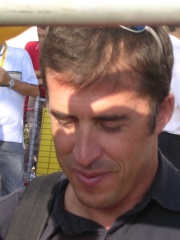 With an HPI of 47.43, Pedro Delgado is the 9th most famous Spanish Cyclist.  His biography has been translated into 29 different languages.

Pedro Delgado Robledo (pronounced [ˈpeðɾo delˈɣaðo ɾoˈbleðo]; born 15 April 1960), also known as Perico ([peˈɾiko]), is a Spanish former professional road bicycle racer. He won the 1988 Tour de France, as well as the Vuelta a España in 1985 and 1989. Delgado is 171 centimetres tall (5 ft 7-1/2 in) and used to weigh 64 kilograms (141 lb). He was a good climber, with an aggressive style, making cycling a spectacle, which gained him fans. On one hand, there were days when he was extremely successful attacking. On the other, he occasionally suffered from big losses of time due to mistakes or strokes of bad luck. He was also a good time-trialist until the nineties, when it became difficult for him to adapt to technical changes in the time-trial bicycles. The ending of the 1987 Tour de France and the 1985 Vuelta a España and the whole 1989 Tour are among his more memorable participations in major competitions. Delgado tested positive for the known masking agent Probenecid during the 1988 tour. The drug, which had been placed on the International Olympic Committee's list of banned substances in January of that year, was not banned by the sport's governing body, the Union Cycliste Internationale (it was a month later); as a consequence, Delgado was allowed to continue racing and was not charged with any doping offence. Delgado was such a consistently strong rider that he finished in the top 10 of eighteen Grand Tours. He works now as a sports commentator for Televisión Española during important cycling events. Delgado inspired the name of the Scottish indie-rock band The Delgados.

With an HPI of 47.00, Emilio Rodríguez is the 10th most famous Spanish Cyclist.  His biography has been translated into 15 different languages.

Pantheon has 123 people classified as cyclists born between 1881 and 1995. Of these 123, 108 (87.80%) of them are still alive today. The most famous living cyclists include Miguel Induráin, Federico Bahamontes, and Alberto Contador. The most famous deceased cyclists include Luis Ocaña, José Manuel Fuente, and Fernand Sanz. As of April 2022, 8 new cyclists have been added to Pantheon including Sebastián Mora, Jon Aberasturi, and Rubén Fernández.

Which Cyclists were alive at the same time? This visualization shows the lifespans of the 13 most globally memorable Cyclists since 1700.