This page contains a list of the greatest Japanese Comic Artists. The pantheon dataset contains 174 Comic Artists, 68 of which were born in Japan. This makes Japan the birth place of the most number of Comic Artists. 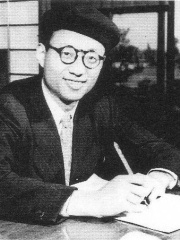 With an HPI of 69.96, Osamu Tezuka is the most famous Japanese Comic Artist.  His biography has been translated into 57 different languages on wikipedia.

Osamu Tezuka (手塚 治虫, born 手塚 治, Tezuka Osamu; (1928-11-03)3 November 1928 – 9 February 1989) was a Japanese manga artist, cartoonist, and animator. Born in Osaka Prefecture, his prolific output, pioneering techniques, and innovative redefinitions of genres earned him such titles as "the Father of Manga" (マンガの父, Manga no Chichi), "the Godfather of Manga" (マンガの教父, Manga no Kyōfu) and "the God of Manga" (マンガの神様, Manga no Kami-sama). Additionally, he is often considered the Japanese equivalent to Walt Disney, who served as a major inspiration during Tezuka's formative years. Though this phrase praises the quality of his early manga works for children and animations, it also blurs the significant influence of his later, more literary, gekiga works. Tezuka began what was known as the manga revolution in Japan with his New Treasure Island published in 1947. His output would spawn some of the most influential, successful, and well-received manga series including the children mangas Astro Boy, Princess Knight and Kimba the White Lion, and the adult-oriented series Black Jack, Phoenix, and Buddha, all of which won several awards. Tezuka died of stomach cancer in 1989. His death had an immediate impact on the Japanese public and other cartoonists. A museum was constructed in Takarazuka dedicated to his memory and life works, and Tezuka received many posthumous awards. Several animations were in production at the time of his death along with the final chapters of Phoenix, which were never released. 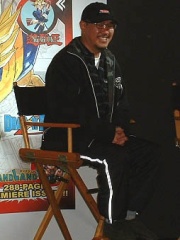 With an HPI of 64.60, Akira Toriyama is the 2nd most famous Japanese Comic Artist.  His biography has been translated into 52 different languages.

Akira Toriyama (Japanese: 鳥山 明, Hepburn: Toriyama Akira, born April 5, 1955) is a Japanese manga artist and character designer. He first achieved mainstream recognition for his highly successful manga series Dr. Slump, before going on to create Dragon Ball (his best-known work) and acting as a character designer for several popular video games such as the Dragon Quest series, Chrono Trigger, and Blue Dragon. Toriyama is regarded as one of the authors who changed the history of manga, as his works are highly influential and popular, particularly Dragon Ball, which many manga artists cite as a source of inspiration. He earned the 1981 Shogakukan Manga Award for best shōnen or shōjo manga with Dr. Slump, and it went on to sell over 35 million copies in Japan. It was adapted into a successful anime series, with a second anime created in 1997, 13 years after the manga ended. His next series, Dragon Ball, would become one of the most popular and successful manga in the world. Having sold 300 million copies worldwide, it is one of the best-selling manga series of all time and is considered to be one of the main reasons for the period when manga circulation was at its highest in the mid-1980s and mid-1990s. Overseas, Dragon Ball's anime adaptations have been more successful than the manga and are credited with boosting anime's popularity in the Western world. In 2019, Toriyama was decorated a Chevalier of the French Ordre des Arts et des Lettres for his contributions to the arts.

With an HPI of 61.18, Tsugumi Ohba is the 3rd most famous Japanese Comic Artist.  His biography has been translated into 31 different languages.

Tsugumi Ohba (Japanese: 大場 つぐみ, Hepburn: Ōba Tsugumi) is the pen name of a Japanese manga writer, best known for authoring the Death Note manga series with illustrator Takeshi Obata from 2003 to 2006, which has 30 million collected volumes in circulation. The duo's second series, Bakuman. (2008–2012), was also successful with 15 million in circulation. In 2014, Ohba collaborated with My Little Monster creator Robico for the one-shot "Skip! Yamada-kun". Another series with Obata, Platinum End, was serialized in the monthly Jump SQ from November 4, 2015, to January 4, 2021.

With an HPI of 60.19, Rumiko Takahashi is the 4th most famous Japanese Comic Artist.  Her biography has been translated into 41 different languages. 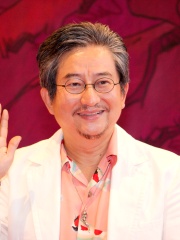 With an HPI of 59.87, Go Nagai is the 5th most famous Japanese Comic Artist.  His biography has been translated into 20 different languages.

Kiyoshi Nagai (永井潔, Nagai Kiyoshi, born September 6, 1945), better known by the pen name Go Nagai (永井 豪, Nagai Gō), is a Japanese manga artist and a prolific author of science fiction, fantasy, horror and erotica. He made his professional debut in 1967 with Meakashi Polikichi, but is best known for creating popular 1970s manga and anime series such as Cutie Honey, Devilman and Mazinger Z. He is credited with creating the super robot genre and for designing the first mecha robots piloted by a user from within a cockpit with Mazinger Z, and for pioneering the magical girl genre with Cutie Honey, the post-apocalyptic manga/anime genre with Violence Jack, and the ecchi genre with Harenchi Gakuen. In 2005, he became a Character Design professor at the Osaka University of Arts. He has been a member of the Tezuka Osamu Cultural Prize's nominating committee since 2009. 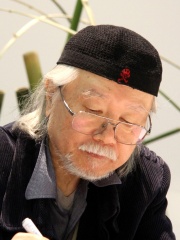 With an HPI of 58.98, Leiji Matsumoto is the 6th most famous Japanese Comic Artist.  His biography has been translated into 27 different languages. 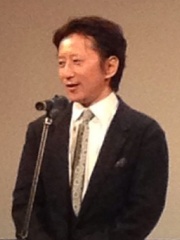 With an HPI of 57.83, Hirohiko Araki is the 7th most famous Japanese Comic Artist.  His biography has been translated into 23 different languages.

Hirohiko Araki (荒木 飛呂彦, Araki Hirohiko, born June 7, 1960) is a Japanese manga artist. He is best known for his long-running series JoJo's Bizarre Adventure, which began publication in Weekly Shōnen Jump in 1987 and has over 120 million copies in circulation, making it one of the best-selling manga series in history.

With an HPI of 57.62, Masashi Kishimoto is the 8th most famous Japanese Comic Artist.  His biography has been translated into 54 different languages.

Masashi Kishimoto (岸本 斉史, Kishimoto Masashi, born November 8, 1974) is a Japanese manga artist. His manga series, Naruto, which was in serialization from 1999 to 2014, has sold over 250 million copies worldwide in 46 countries as of May 2019. The series has been adapted into two anime and multiple films, video games, and related media. Besides the Naruto manga, Kishimoto also personally supervised the two canonical anime films, The Last: Naruto the Movie and Boruto: Naruto the Movie, and has written several one-shot stories. In 2019, Kishimoto wrote Samurai 8: The Tale of Hachimaru which ended in March 2020. From May 2016 through October 2020 he supervised the Boruto: Naruto Next Generations manga written by Ukyō Kodachi and illustrated by Mikio Ikemoto. In November 2020 it was announced that he had taken over as writer on the series, replacing Kodachi.A reader of manga from a young age, Kishimoto showed a desire to write his own manga, citing authors Akira Toriyama and Katsuhiro Otomo as his main influences. As a result, Kishimoto spent several years working to write his own shōnen manga for Weekly Shōnen Jump magazine which he was a fan of. 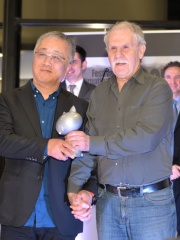 With an HPI of 57.20, Katsuhiro Otomo is the 9th most famous Japanese Comic Artist.  His biography has been translated into 26 different languages.

Katsuhiro Otomo (大友 克洋, Ōtomo Katsuhiro, born April 14, 1954) is a Japanese manga artist, screenwriter, animator and film director. He is best known as the creator of Akira, in terms of both the original 1982 manga series and the 1988 animated film adaptation. He was decorated a Chevalier of the French Ordre des Arts et des Lettres in 2005, promoted to Officier of the order in 2014, became the fourth manga artist ever inducted into the American Eisner Award Hall of Fame in 2012, and was awarded the Purple Medal of Honor from the Japanese government in 2013. Otomo later received the Winsor McCay Award at the 41st Annie Awards in 2014 and the 2015 Grand Prix de la ville d'Angoulême, the first manga artist to receive the award. Otomo is married to Yoko Otomo. Together they have one child, a son named Shohei Otomo, who is also an artist.

With an HPI of 57.04, Eiichiro Oda is the 10th most famous Japanese Comic Artist.  His biography has been translated into 45 different languages.

Eiichiro Oda (Japanese: 尾田 栄一郎, Hepburn: Oda Eiichirō, born January 1, 1975) is a Japanese manga artist and the creator of the series One Piece (1997–present). With more than 516.6 million tankōbon copies in circulation worldwide, One Piece is both the best-selling manga in history and the best-selling comic series printed in volume, in turn making Oda one of the best-selling fiction authors. The series' popularity resulted in Oda being named one of the manga artists that changed the history of manga.

Which Comic Artists were alive at the same time? This visualization shows the lifespans of the 9 most globally memorable Comic Artists since 1700.