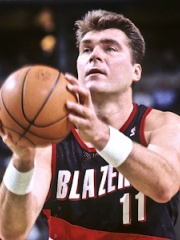 With an HPI of 55.69, Arvydas Sabonis is the most famous Lithuanian Basketball Player.  His biography has been translated into 47 different languages on wikipedia.

Arvydas Romas Sabonis (Lithuanian pronunciation: ​[ˈaːrviːdaːs ˈsaːboːnʲɪs]; born December 19, 1964) is a Lithuanian former professional basketball player and businessman. Recognized as one of the best European players of all time, he won the Euroscar six times and the Mr. Europa Award twice. He played in a variety of leagues, including the Spanish ACB League, and spent seven seasons in the National Basketball Association (NBA). Playing the center position, Sabonis won a gold medal at the 1988 Summer Olympics, in South Korea, for the Soviet Union, and later earned bronze medals at the 1992 Olympic Games and 1996 Olympic Games representing Lithuania. He retired from professional basketball in 2005. Sabonis was selected by the Portland Trail Blazers in the first round of the 1986 NBA draft, but he did not play his first NBA game until 1995, at the age of 30. Sabonis is considered one of the best big man passers, as well as one of the best overall centers, in the history of the game. Bill Walton once called Sabonis "a 7 ft 3 in (2.21 m) Larry Bird" due to his unique court vision, shooting range, rugged in-game mentality, and versatility.On August 20, 2010, Sabonis was inducted into the FIBA Hall of Fame, in recognition of his great play in international competition. On April 4, 2011, Sabonis was named to the Naismith Memorial Basketball Hall of Fame, and he was as a player, inducted on August 12, 2011. At that time, he was the tallest player to ever enter the Naismith Memorial Basketball Hall of Fame; one year later, he would be surpassed by 7 ft 4 in (2.24 m) Ralph Sampson. On October 24, 2011, Sabonis was voted as the next President of the Lithuanian Basketball Federation, replacing Vladas Garastas, who had led the LBF since 1991. He resigned from the position on October 2, 2013, but came back to it on October 10, 2013. His son, Domantas Sabonis, is a current NBA player for the Sacramento Kings. 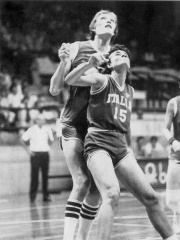 With an HPI of 55.51, Uljana Semjonova is the 2nd most famous Lithuanian Basketball Player.  Her biography has been translated into 30 different languages.

Uļjana Larionovna Semjonova (Russian: Ульяна Ларионовна Семёнова, romanized: Ul'yana Larionovna Semyonova; born 9 March 1952) is a retired Latvian basketball player who competed for the Soviet Union.Standing at least 2.13 m (7 ft 0 in) Semjonova was the leading women's basketball player in the world in the 1970s and 1980s. Wearing a men's size 21 (US) / 58 (EU) shoe, she was known for having the largest feet ever in women's basketball. For almost all of her playing career, she played for TTT Riga, which was part of Daugava Voluntary Sports Society. With TTT, she won 15 championships in the Soviet Union and the European Champion's Cup 15 times. Semjonova was also very dominant in international play, winning two Olympic Gold medals while playing for the USSR in 1976 and 1980 and never lost a game in official international competition.She was awarded the Order of the Red Banner of Labour in 1976, and in 1993 became the first non-US woman enshrined into the Basketball Hall of Fame. She was an inaugural member of the Women's Basketball Hall of Fame in the class of 1999. In 2007, she was enshrined in the FIBA Hall of Fame. During the 2007 Latvian sports personality of the year award ceremony, Semjonova received the Lifetime Contribution to Sport award. 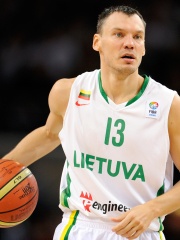 With an HPI of 50.39, Šarūnas Jasikevičius is the 3rd most famous Lithuanian Basketball Player.  His biography has been translated into 33 different languages.

Šarūnas "Šaras" Jasikevičius ([ʃɐˈrûːnɐs jɛsʲɪˈkʲæːvʲɪtɕʊs] (listen); born 5 March 1976) is a Lithuanian professional basketball coach and former player. He currently serves as a head coach for FC Barcelona of the Liga ACB and the EuroLeague. During his playing career, standing at a height of 6 ft 4 in (1.93 m) tall, he played at the point guard position. Often considered one of the best Lithuanian and European point guards ever, Jasikevičius was a two-time All-EuroLeague First Team selection, the EuroLeague Final Four MVP in 2005 and a four-time triple crown winner. He was named the 2005 Israeli Basketball Premier League MVP. Moreover, he is the only player in EuroLeague history to win the competition with three clubs. A former representative of the senior Lithuanian men's national team, he won the gold medal at 2003 EuroBasket, earning an All-EuroBasket Team selection and MVP honors in the process. He also won the bronze medal at the 2000 Summer Olympic Games, and the bronze medal at 2007 EuroBasket. On 9 February 2015, Jasikevičius was named a EuroLeague Basketball Legend, as a reward for his stunning playing career. He was then honored with a ceremony on 12 February. 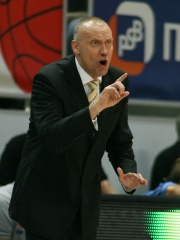 With an HPI of 47.73, Rimas Kurtinaitis is the 4th most famous Lithuanian Basketball Player.  His biography has been translated into 26 different languages.

Rimas Kurtinaitis (born May 15, 1960) is a Lithuanian professional basketball coach, and a retired professional basketball player, who was a member of the senior Soviet and Lithuanian national basketball teams during his playing career. He won a gold medal at 1988 Olympics in South Korea. He recently worked as the head coach for Khimki. At a height of 1.96 m (6'5") tall, during his playing career, he played at the shooting guard position. He is the only non-NBA player to ever participate at the NBA All-Star Weekend's Three-Point Contest, doing so in 1989, where he scored 9 points. 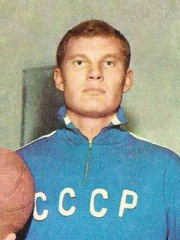 With an HPI of 46.80, Modestas Paulauskas is the 5th most famous Lithuanian Basketball Player.  His biography has been translated into 19 different languages.

Modestas Paulauskas (19 March 1945) is a former Soviet and Lithuanian professional basketball coach and basketball player. As a player, he was the youngest EuroBasket MVP in history, being only 20 years old at the time he won the award. He is known for having been one of the best Lithuanian basketball players of all time, and for having excellent dribbling ability. He was selected as the Lithuanian Sportsman of the Year, a record seven times, in 1965–1967, and 1969–1972. He was a member of the Soviet team that achieved Olympic Gold in 1972 in Munich. In 1991, he was named one of FIBA's 50 Greatest Players. In 2021, he was included into the FIBA Hall of Fame. 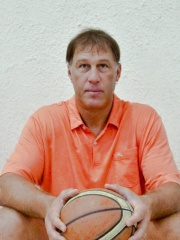 With an HPI of 45.39, Šarūnas Marčiulionis is the 6th most famous Lithuanian Basketball Player.  His biography has been translated into 34 different languages.

Raimondas Šarūnas Marčiulionis ([ˈrɐ̂ˑɪ̯mɔndɐs ʃɐˈrûːnɐs mɐrʲtɕʊˈlʲôːnʲɪs] (listen)) (born June 13, 1964) is a Lithuanian retired professional basketball player. Widely considered one of the greatest international players, he was one of the first Europeans to become a regular in the National Basketball Association (NBA). On August 8, 2014, Marčiulionis was inducted into the Naismith Memorial Basketball Hall of Fame, and became a member of the FIBA Hall of Fame in 2015. In the 1988 Summer Olympics, together with teammate Arvydas Sabonis, Marčiulionis led the senior USSR national team to the gold medal. With the senior Lithuanian national team, he won two Summer Olympics bronze medals, in 1992 and 1996. He was an All-Tournament Team member, the top scorer, and the MVP of the EuroBasket 1995, and he was also elected to the All-EuroBasket Team in 1987. Marčiulionis is also often remembered and associated with the Euro step move, which was popularized by Manu Ginóbili in the mid-2000s, during Marčiulionis' seven seasons playing in the NBA. 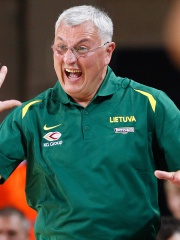 With an HPI of 44.79, Jonas Kazlauskas is the 7th most famous Lithuanian Basketball Player.  His biography has been translated into 19 different languages.

Jonas Kazlauskas (born 21 November 1954) is a Lithuanian professional basketball coach and former player. He was most recently the head coach of the Guangdong Southern Tigers in the Chinese Basketball Association (CBA). 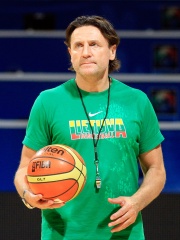 With an HPI of 44.23, Valdemaras Chomičius is the 8th most famous Lithuanian Basketball Player.  His biography has been translated into 20 different languages.

Valdemaras Chomičius (also known as Valdemaras Homicius; born May 4, 1959) is a Lithuanian former professional basketball player for the Soviet and Lithuanian national basketball team, and an assistant coach for the Lithuanian national team. As a 192 cm (6 ft 3+1⁄2 in) tall point guard he is best remembered as the captain from the "golden years" of Žalgiris Kaunas by winning three consecutive USSR League championships against the rival CSKA Moscow in 1985–1987. His former teams include Žalgiris Kaunas, Forum Valladolid, CAI Zaragoza. He also has played in Italy for Aprimatic Bologna (Serie A2) in the 1990–1991 season. He last played for Olimpas Žemaitija during the 1996–1997 season. He served as player-coach for Kraitenė Marijampolė, was the assistant coach with PBC Ural Great Perm from 1999 to 2004, also serving as head coach for the team in the 2004-2005 season. He briefly coached PBC Dynamo Moscow in 2003, and was the assistant coach for BC UNICS, serving as the team's head coach in the 2009-2010 season. He was also the head coach for Triumph Lyubertsy from 2010 to 2012, BC Dnipro from 2012 to 2015, and worked as a coach for BC Parma in the 2016–17 season. In 2018–2020 he was head coach for BC Dzūkija. He head coached the Lithuania national team to win the FIBA Stanković Continental Champions' Cup in 2005 FIBA Stanković Continental Champions' Cup. 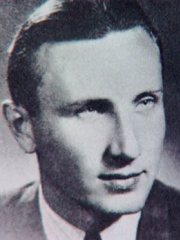 With an HPI of 43.85, Stepas Butautas is the 9th most famous Lithuanian Basketball Player.  His biography has been translated into 16 different languages.

Stepas Butautas (alternate spellings: Stiepas, Butaustas) (25 August 1925 – 22 March 2001 in Kaunas) was a Soviet and Lithuanian professional basketball player and coach. He trained at the VSS Žalgiris, in Kaunas. He played with the Soviet Union men's national basketball team at the 1952 Summer Olympic Games, where he won a silver medal. During the tournament, he played in all eight games.He was named one of FIBA's 50 Greatest Players in 1991.

With an HPI of 42.43, Sergejus Jovaiša is the 10th most famous Lithuanian Basketball Player.  His biography has been translated into 15 different languages.

Sergejus Jovaiša (born 17 December 1954 in Anykščiai) is a former basketball player from Soviet Union and Lithuania. He played at the shooting guard position and won the bronze medal with the Lithuania national basketball team at the 1992 Summer Olympics in Barcelona, Spain. In 1980 he was a member of the Soviet team that won the bronze medal at the 1980 Summer Olympics.