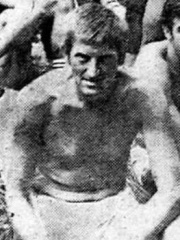 With an HPI of 56.74, Radivoj Korać is the most famous Serbian Basketball Player.  His biography has been translated into 22 different languages on wikipedia.

Radivoj Korać (Serbian Cyrillic: Радивој Кораћ; 5 November 1938 – 2 June 1969) was a Serbian and Yugoslav professional basketball player. He represented the Yugoslavia national basketball team internationally. Korać is well-known for holding the EuroLeague's all-time single-game scoring record (since 1958), at 99 points scored, in a game versus Alviks, during the 1964–65 season, and for once making 100 out of 100 free throws on a live television show in Belgium.Korać died in a car crash in 1969, at the age of 30, and FIBA Europe later established the European-wide third-tier level FIBA Radivoj Korać Cup, in his remembrance, in 1971. Korać was named one of FIBA's 50 Greatest Players in 1991. In 2002, the Basketball Federation of FR Yugoslavia named its top national domestic cup competition, the Radivoj Korać Cup, after him. He was enshrined into the FIBA Hall of Fame in 2007, and was named one of the 50 Greatest EuroLeague Contributors the following year. 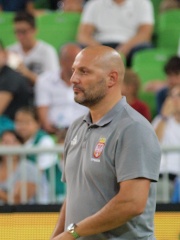 With an HPI of 52.36, Aleksandar Đorđević is the 2nd most famous Serbian Basketball Player.  His biography has been translated into 32 different languages.

Aleksandar "Saša" Đorđević or Sale Đorđević (Anglicized: Sasha Djordjevic; Serbian Cyrillic: Александар Саша Ђорђевић, pronounced [aleksǎːndar sâʃa dʑǒːrdʑeʋitɕ]; born 26 August 1967) is a Serbian professional basketball coach and former player. He currently serves as a head coach for the senior China. During his playing career, he was listed as a 1.88 m (6'2") 90 kg (198 lb.) point guard. During his pro club playing career, Đorđević, along with his teammate Sasha Danilović, helped to lead Partizan Belgrade to its first EuroLeague title in 1992, while he earned an All-Final Four Team selection in the process. He was twice named the Mister Europa Player of the Year, in both 1994 and 1995. He also played in a total of 108 games, while representing the senior national teams of SFR Yugoslavia, and later FR Yugoslavia. As a player, he won gold medals at the 1991 EuroBasket, the 1995 EuroBasket, the 1997 EuroBasket, where he was named the Most Valuable Player, and the 1998 FIBA World Championship. In 1995, Đorđević received the Golden Badge award for the Best Athlete of FR Yugoslavia, and the Yugoslav Olympic Committee declared him the Sportsman of the Year. In 2008, Đorđević was named one of the 50 Greatest EuroLeague Contributors. Đorđević is most well-known for two famous game-winning shots that he hit during his playing career. He hit the game-winning shot of the 1992 EuroLeague Final, and the game-winning shot of the 1997 EuroBasket game between FR Yugoslavia and Croatia. He is the only person that has won medals at the Summer Olympic Games, the FIBA World Cup, and the FIBA EuroBasket, as both a player and as a head coach. 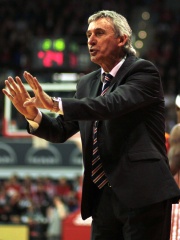 With an HPI of 51.57, Svetislav Pešić is the 3rd most famous Serbian Basketball Player.  His biography has been translated into 17 different languages.

With an HPI of 49.69, Dragan Kićanović is the 4th most famous Serbian Basketball Player.  His biography has been translated into 20 different languages.

Dragan Kićanović (Serbian: Драган Кићановић; born 17 August 1953) is a Serbian and Yugoslav retired professional basketball player. A 1.92m (6 ft 33⁄4 in) tall shooting guard, Kićanović played in the 1970s and 1980s, and is considered to be one of the best European players and scorers of all time, having won both the Mr. Europa and the Euroscar European Player of the Year awards in 1981 and 1982. He was named one of FIBA's 50 Greatest Players in 1991. On 20 August 2010, Kićanović became a FIBA Hall of Fame player, in recognition of his play in international competitions. He was named the Best athlete of Yugoslavia in 1982, and he was also named the Best Basketball Player of Yugoslavia in the 20th century.Since September 2013, he's been performing the role of consul general at the Serbian consulate in Trieste. 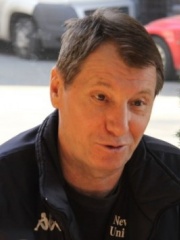 With an HPI of 48.78, Zoran Slavnić is the 5th most famous Serbian Basketball Player.  His biography has been translated into 18 different languages.

Zoran "Moka" Slavnić (Serbian Cyrillic: Зоран Мока Славнић; born 26 October 1949) is a Serbian retired professional basketball player and coach. He played with Crvena zvezda and with Partizan. One of the best European point guards of all time, he was named one of FIBA's 50 Greatest Players in 1991, and he became a FIBA Hall of Fame player in 2013. With Crvena zvezda, he won two Yugoslav National Championships, three Yugoslav National Cups, and one FIBA European Cup Winner's Cup. He also won the Spanish League championship with Joventut Badalona. During his basketball career, he played for Crvena zvezda (1967–1977), Joventut Badalona (1977–1979), Šibenka (1979–1981), and Partizan (1981–1982). His head coaches were Ranko Žeravica, Zdravko Kubat, and Mirko Novosel. Slavnić was one of the rare players who won everything he could in a career with his national team: 3 EuroBaskets (1973, 1975, 1977), the FIBA World Cup (1978), and Summer Olympics gold (1980). 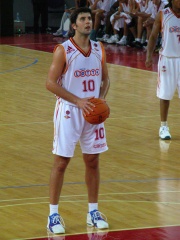 With an HPI of 47.40, Dejan Bodiroga is the 6th most famous Serbian Basketball Player.  His biography has been translated into 30 different languages.

Dejan Bodiroga (Serbian Cyrillic: Дејан Бодирога; born 2 March 1973) is a Serbian basketball executive and former professional player, who is currently the President of EuroLeague Basketball. In 1998 and 2002, he received the Golden Badge award for the best athlete of Yugoslavia, and the Yugoslav Olympic Committee also declared him the Sportsman of the Year. HoopsHype named Bodiroga one of the 75 Greatest International Players Ever in 2021. He was inducted into the Greek Basket League Hall of Fame in 2022.During his playing career, he mainly played at the small forward position, but he could also play point forward, and at both guard positions. A EuroLeague icon of the early part of the 2000s, Bodiroga was named to the 50 Greatest EuroLeague Contributors in 2008, and to the EuroLeague 2000–2010 All-Decade Team in 2010. He was also voted by fans the EuroLeague's 2000–2010 Player of the Decade. At the club level, Bodiroga proved himself to be a symbol of basketball excellence, by lifting consecutive EuroLeague trophies in 2002 and 2003, with Panathinaikos and FC Barcelona, as he earned the EuroLeague Final Four MVP award both times. He also won each of the three major European national domestic basketball league titles: the Spanish ACB League, the Italian A League, and the Greek Basket League. He is widely regarded as one of the greatest European players of all time.With the senior FR Yugoslavian national team, Bodiroga won three EuroBasket gold medals, in 1995, 1997, and 2001, as well as a bronze medal in 1999. With FR Yugoslavia, he also won a silver medal at the 1996 Summer Olympics. In addition to that, Bodiroga also won two FIBA World Cup gold medals with FR Yugoslavia, in 1998 and 2002, earning MVP honors in the former. 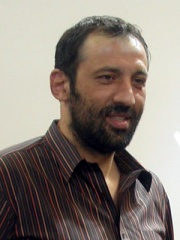 With an HPI of 46.29, Vlade Divac is the 7th most famous Serbian Basketball Player.  His biography has been translated into 40 different languages.

Vlade Divac (Serbian Cyrillic: Владе Дивац, pronounced [ʋlǎːde dǐːʋats]; born February 3, 1968) is a Serbian professional basketball executive and former player who was most recently the vice president of basketball operations and general manager of the Sacramento Kings of the National Basketball Association (NBA). Divac spent most of his playing career in the NBA. At 7 ft 1 in (2.16 m), he played center and was known for his passing skills. He was among the first group of European basketball players to transfer to the NBA in the late 1980s and was named one of the 50 Greatest EuroLeague Contributors. He is one of seven players in NBA history to record 13,000 points, 9,000 rebounds, 3,000 assists, and 1,500 blocked shots, along with Kareem Abdul-Jabbar, Hakeem Olajuwon, Shaquille O'Neal, Tim Duncan, Kevin Garnett, and Pau Gasol. Divac was also the first player born and trained outside the United States to play in over 1,000 games in the NBA. On August 20, 2010, he was inducted into the FIBA Hall of Fame in recognition of his play in international competition. He was elected to the Naismith Memorial Basketball Hall of Fame in 2019.Divac is a humanitarian, helping children in his native country of Serbia and in Africa. In October 2008, he was appointed as government adviser in Serbia for humanitarian issues. In February 2009, he was elected President of the Serbian Olympic Committee for a four-year term and re-elected in November 2012. In 2013, Divac received an honor from the World Sports Humanitarian Hall of Fame. 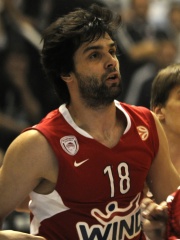 With an HPI of 43.09, Miloš Teodosić is the 8th most famous Serbian Basketball Player.  His biography has been translated into 37 different languages.

Miloš Teodosić (Serbian Cyrillic: Милош Теодосић, born March 19, 1987) is a Serbian professional basketball player for Virtus Bologna of the Italian Lega Basket Serie A (LBA) and the EuroLeague. He also represents the National Basketball Team of Serbia internationally. He primarily plays the point guard and shooting guard positions. He is a six time All-EuroLeague selection, and was voted EuroLeague MVP in 2010.Teodosić helped the Serbian national team win a EuroBasket silver medal in 2009, as well as a FIBA Basketball World Cup silver medal in 2014, being elected to the All-Tournament Team in both competitions. He also won an Olympic silver medal at the 2016 Rio Games. He was named FIBA Europe Player of the Year in 2010, and in 2016, he was voted the best non-NBA player in the world by NBA coaches, as well as the European Player of the Year by La Gazzetta dello Sport. 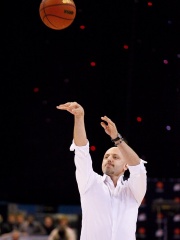 With an HPI of 41.98, Saša Obradović is the 9th most famous Serbian Basketball Player.  His biography has been translated into 15 different languages.

Saša Obradović (Anglicized: Sasha Obradovic; Serbian Cyrillic: Саша Обрадовић, pronounced [sâʃa obrǎːdoʋit͜ɕ]; born 29 January 1969) is a Serbian professional basketball coach and former player. He is currently the head coach for AS Monaco of the French LNB Pro A Standing at 1.97 m (6 ft 5+1⁄2 in), he played in the guard position for Crvena zvezda, Limoges, Alba Berlin, Virtus Roma, Budućnost, and RheinEnergie Köln. During his playing career, he won FIBA Korać Cup in 1995, three YUBA League championships and a Yugoslav Cup, as well as German League title and three German Cup tournaments. A Yugoslav international, Obradović won three FIBA EuroBasket gold medals (1995, 1997, 2001), and a bronze medal in 1999. He also won the gold medal at the 1998 FIBA World Championship and the Olympic silver medal at the 1996 Olympics. Obradović finished his playing career in 2005 with RheinEnergie Köln. The following season, he became their head coach and won the German League in his rookie season. In the 2011–12 season, he coached Donetsk to their first-ever Ukrainian Super League title. Thereafter, he coached Alba Berlin for four seasons, winning three German Cup tournaments. In 2018 Obradović won the Russian Cup with Lokomotiv Kuban, earning the EuroCup Coach of the Year award. 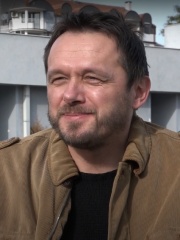 With an HPI of 40.41, Željko Rebrača is the 10th most famous Serbian Basketball Player.  His biography has been translated into 22 different languages.

Željko Rebrača (Serbian Cyrillic: Жељко Ребрача; born 9 April 1972) is a Serbian retired professional basketball player who is the president of Vojvodina. After playing in the National Basketball Association (NBA), he finished his career with the Spanish ACB League team Pamesa Valencia.