This page contains a list of the greatest Norwegian Athletes. The pantheon dataset contains 3,059 Athletes, 81 of which were born in Norway. This makes Norway the birth place of the 13th most number of Athletes behind Poland and Canada.

The following people are considered by Pantheon to be the top 10 most legendary Norwegian Athletes of all time. This list of famous Norwegian Athletes is sorted by HPI (Historical Popularity Index), a metric that aggregates information on a biography’s online popularity. Visit the rankings page to view the entire list of Norwegian Athletes. 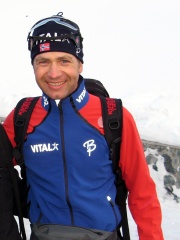 With an HPI of 55.14, Ole Einar Bjørndalen is the most famous Norwegian Athlete.  His biography has been translated into 52 different languages on wikipedia.

Ole Einar Bjørndalen (Norwegian pronunciation: [ˈûːɻə ˌæi̯nɑɾ ˈbjø̂ːɳˌɖɑːɫn̩]) (born 27 January 1974) is a retired Norwegian professional biathlete and coach, often referred to by the nickname, the "King of Biathlon". With 13 Winter Olympic Games medals, he is second on the list of multiple medalists behind Marit Bjørgen who has won 15 medals. He is also the most successful biathlete of all time at the Biathlon World Championships, having won 45 medals. With 95 World Cup wins, Bjørndalen is ranked first all-time for career victories on the Biathlon World Cup tour. He has won the Overall World Cup title six times, in 1997–98, in 2002–03, in 2004–05, in 2005–06, in 2007–08 and in 2008–09. In 1992, he won his first career medal at the junior world championships. A year later in 1993, after winning three junior world championship titles, a medal haul only previously achieved by Sergei Tchepikov, Bjørndalen made his Biathlon World Cup debut. His breakthrough came in 1994 when he featured on his first World Cup podium in a sprint race held in Bad Gastein, Austria. Bjørndalen first competed in the Olympic Games at the Lillehammer 1994 Winter Olympics, held in his home country of Norway. He obtained his first major victory on 11 January 1996 in an individual competition held in Antholz-Anterselva, Italy. On 20 February 2014, Bjørndalen was elected to an eight-year term at the International Olympic Committee's athlete commission. He resigned from this role in 2016 as he elected to continue his career. 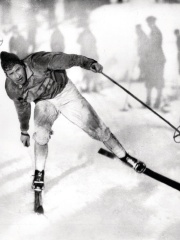 With an HPI of 51.76, Johan Grøttumsbråten is the 2nd most famous Norwegian Athlete.  His biography has been translated into 22 different languages.

Johan Hagbart Pedersen Grøttumsbraaten (24 February 1899 – 24 January 1983) was a Norwegian skier who competed in Nordic combined and cross-country. Dominating both events in the 1920s and early 1930s, he won several medals in the early Winter Olympics. Most notably, he won two gold medals at the 1928 Winter Olympics, and as one of the only two entrants to win two gold medalists from St. Moritz, was the most successful athlete there, along with Clas Thunberg of Finland. He previously won three medals (one silver, two bronzes) at the inaugural Winter Olympics held in Chamonix in 1924, and went on to defend his Olympic title in Nordic Combined Skiing at the 1932 Winter Olympics.In addition, he won three gold medals at the FIS Nordic World Ski Championships: In 1931 he won both the cross-country 18 km and Nordic combined, after winning the Nordic combined event earlier in 1926. Grøttumsbråten is one of only four people to ever win the Holmenkollen ski festival's Nordic combined event five times (1923, 1926, 1928, 1929 and 1931). In 1924, he shared the Holmenkollen medal with fellow Norwegian Nordic combined athlete Harald Økern. 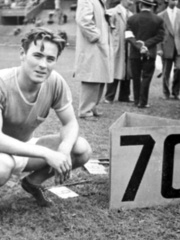 With an HPI of 50.45, Egil Danielsen is the 3rd most famous Norwegian Athlete.  His biography has been translated into 25 different languages.

Egil Danielsen (9 November 1933 – 29 July 2019) was a Norwegian javelin thrower. He competed at the 1956 and 1960 Olympics and won the gold medal in 1956. Danielsen, who used an old-type wooden javelin, did poorly in the 1956 final, which was led by his Polish friend Janusz Sidło. Trying to help Danielsen, Sidło lent him his modern steel javelin, and Michel Macquet gave him a cup of strong coffee. Danielsen set a new world record at 85.71 m and won the gold medal. He could never reproduce that throw. For his Olympic victory and world record Danielsen was selected Norwegian Sportsperson of the Year in 1956.Danielsen finished tenth at the 1954 European Championships and won a silver medal in 1958, behind Sidło. He became Norwegian champion in 1953–1957.Danielsen was an avid cross-country skier before changing to javelin throw. He took fencing lessons from a top Norwegian fencer to improve his flexibility, reflexes and the use of right arm. He retired after the 1960 Olympics and focused on his family and work at the Hamar Fire Brigade. In the 2000s he was a minor political candidate for the Norwegian Pensioner Party. 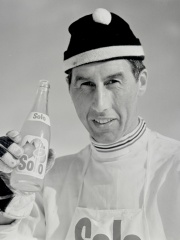 With an HPI of 49.61, Harald Grønningen is the 4th most famous Norwegian Athlete.  His biography has been translated into 18 different languages.

Harald Grønningen (9 October 1934 – 26 August 2016) was a Norwegian cross-country skier who competed during the 1960s, earning five winter olympic and two world championship medals. He also won nine Norwegian championship titles and received the King's cup in 1963 and 1967. Grønningen won the 15 km twice (1960 and 1961) at the Holmenkollen ski festival and earned the Holmenkollen medal in 1961. Grønningen was born in Lensvik. He was also an able long distance runner. His personal best times were 15:03.2 minutes in the 5000 metres, achieved in September 1963 at Trondheim stadion, and 31:04.6 minutes in the 10,000 metres, achieved in September 1961 at the same stadium. He represented the club Lensvik IL. 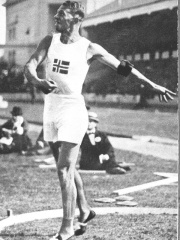 With an HPI of 49.54, Helge Løvland is the 5th most famous Norwegian Athlete.  His biography has been translated into 25 different languages.

Helge Andreas Løvland (11 May 1890, Froland – 26 April 1984, Oslo) was a Norwegian track and field athlete. He won the gold medal in the decathlon at the 1920 Olympics. Løvland was awarded the Egebergs Ærespris in 1919. Representing the club IF Ørnulf, he died in Oslo in 1984.During the occupation of Norway by Nazi Germany he was arrested in August 1943 during the crackdown on military officers. He was imprisoned in Schildberg and Luckenwalde. 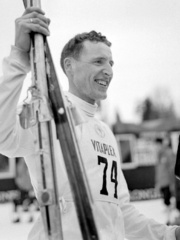 With an HPI of 49.47, Ole Ellefsæter is the 6th most famous Norwegian Athlete.  His biography has been translated into 17 different languages.

Ole Martin Ellefsæter (15 February 1939 – 18 October 2022) was a Norwegian athlete. He mostly competed in cross-country skiing, and won two gold medals at the 1968 Winter Olympics. At the 1966 FIS Nordic World Ski Championships he won one gold (4 × 10 km relay) and one silver (15 km) medal, and in 1971 he became the first Norwegian to win Vasaloppet. Competing in the 3000 metres steeplechase, he won six national championships in a row, from 1960 to 1965. For his accomplishments in both sports, he was awarded Egebergs Ærespris. Ellefsæter also had a singing career, and had two hit songs in Norway. 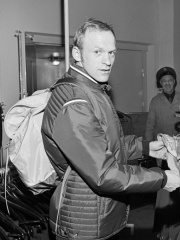 With an HPI of 49.31, Pål Tyldum is the 7th most famous Norwegian Athlete.  His biography has been translated into 17 different languages. 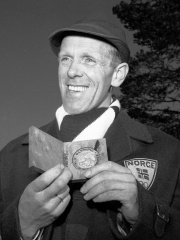 With an HPI of 48.96, Håkon Brusveen is the 8th most famous Norwegian Athlete.  His biography has been translated into 17 different languages.

Håkon Brusveen (15 July 1927 – 21 April 2021) was a Norwegian cross-country skier. He competed in the individual 15 km and 4 × 10 km relay events at the 1956 and 1960 Olympics and won two medals in 1960: a gold in the 15 km and a silver in the relay; in 1956 he placed fifth and fourth, respectively. In 1958 he was awarded the Holmenkollen medal, and in 1960 the Morgenbladet Gold Medal. A freelance sports broadcaster for NRK for 35 years, he was a pioneering color commentator of cross-country skiing events. 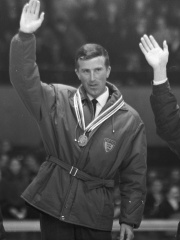 With an HPI of 48.93, Magnar Solberg is the 9th most famous Norwegian Athlete.  His biography has been translated into 18 different languages.

Magnar Solberg (born 4 February 1937) is a former Norwegian biathlete and police officer. He won a gold medal in the 20 km at the 1968 and 1972 Winter Olympics; his 4 × 7.5 km relay teams placed second in 1968 and fourth in 1972. In 1968 he was awarded Morgenbladets Gullmedalje, and in 1972 served as the Olympic flag bearer for Norway at the opening ceremony. He was one of the 16 former Norwegian athletes selected to bring in the Olympic Flag at the Opening Ceremony of the 1994 Winter Olympics.After retiring from competitions Solberg became a police officer. He was one of the officers responsible for the miscarriage of justice against Fritz Moen, by adjusting a murder victims time of death in order to dismiss Moens alibi. He later admitted to wrongdoing, retired from the police force, and worked in the insurance industry. 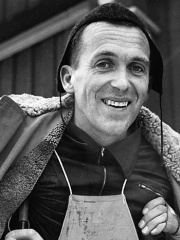 With an HPI of 48.45, Hallgeir Brenden is the 10th most famous Norwegian Athlete.  His biography has been translated into 18 different languages.

Pantheon has 81 people classified as athletes born between 1866 and 2000. Of these 81, 57 (70.37%) of them are still alive today. The most famous living athletes include Ole Einar Bjørndalen, Ole Ellefsæter, and Pål Tyldum. The most famous deceased athletes include Johan Grøttumsbråten, Egil Danielsen, and Harald Grønningen. As of April 2022, 22 new athletes have been added to Pantheon including Pål Tyldum, Håkon Brusveen, and Gjermund Eggen.

Which Athletes were alive at the same time? This visualization shows the lifespans of the 22 most globally memorable Athletes since 1700.