This page contains a list of the greatest Astronauts. The pantheon dataset contains 524 Astronauts, 83 of which were born in Russia. This makes Russia the birth place of the 2nd most number of Astronauts.

The following people are considered by Pantheon to be the top 10 most legendary Astronauts of all time. This list of famous Astronauts is sorted by HPI (Historical Popularity Index), a metric that aggregates information on a biography’s online popularity. Visit the rankings page to view the entire list of Astronauts. 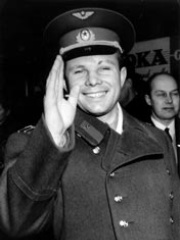 With an HPI of 85.94, Yuri Gagarin is the most famous Astronaut.  His biography has been translated into 155 different languages on wikipedia.

Yuri Alekseyevich Gagarin (9 March 1934 – 27 March 1968) was a Soviet pilot and cosmonaut who became the first human to journey into outer space. Travelling in the Vostok 1 capsule, Gagarin completed one orbit of Earth on 12 April 1961. By achieving this major milestone in the Space Race he became an international celebrity, and was awarded many medals and titles, including Hero of the Soviet Union, his nation's highest honour. Gagarin was born in the Russian village of Klushino, and in his youth was a foundryman at a steel plant in Lyubertsy. He later joined the Soviet Air Forces as a pilot and was stationed at the Luostari Air Base, near the Norwegian border, before his selection for the Soviet space programme with five other cosmonauts. Following his spaceflight, Gagarin became deputy training director of the Cosmonaut Training Centre, which was later named after him. He was also elected as a deputy of the Soviet of the Union in 1962 and then to the Soviet of Nationalities, respectively the lower and upper chambers of the Supreme Soviet. Vostok 1 was Gagarin's only spaceflight, but he served as the backup crew to the Soyuz 1 mission, which ended in a fatal crash, killing his friend and fellow cosmonaut Vladimir Komarov. Fearful that a national hero might be killed, Soviet officials banned Gagarin from further spaceflights. After completing training at the Zhukovsky Air Force Engineering Academy in February 1968, he was again allowed to fly regular aircraft. Gagarin died five weeks later when the MiG-15 training jet he was piloting with flight instructor Vladimir Seryogin crashed near the town of Kirzhach. 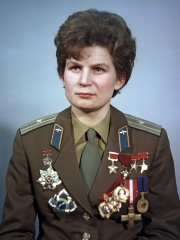 With an HPI of 77.01, Valentina Tereshkova is the 2nd most famous Astronaut.  Her biography has been translated into 99 different languages.

Valentina Vladimirovna Tereshkova (Russian: Валентина Владимировна Терешкова, IPA: [vɐlʲɪnʲˈtʲinə vlɐˈdʲimʲɪrəvnə tʲɪrʲɪʂˈkovə] (listen); born 6 March 1937) is an engineer, member of the Russian State Duma, and former Soviet cosmonaut. She is known for being the first and youngest woman in space, having flown a solo mission on the Vostok 6 on 16 June 1963. She orbited the Earth 48 times, spent almost three days in space, and remains the only woman to have been on a solo space mission. Before her selection for the Soviet space program, Tereshkova was a textile factory worker and an amateur skydiver. She joined the Air Force as part of the Cosmonaut Corps and was commissioned as an officer after completing her training. After the dissolution of the first group of female cosmonauts in 1969, Tereshkova remained in the space program as a cosmonaut instructor. She later graduated from the Zhukovsky Air Force Engineering Academy and re-qualified for spaceflight but never went to space again. She retired from the Air Force in 1997 having attained the rank of major general. Tereshkova was a prominent member of the Communist Party of the Soviet Union, holding various political offices including being a member of the Presidium of the Supreme Soviet from 1974 to 1989. She remained politically active following the collapse of the Soviet Union but twice lost elections to the national State Duma in 1995 and 2003. Tereshkova was later elected in 2008 to her regional parliament, the Yaroslavl Oblast Duma. In 2011, she was elected to the national State Duma as a member of the United Russia party and was re-elected in 2016 and 2021. 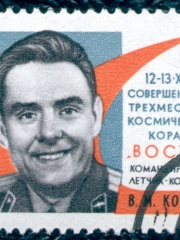 With an HPI of 70.23, Vladimir Komarov is the 3rd most famous Astronaut.  His biography has been translated into 59 different languages.

Vladimir Mikhaylovich Komarov (Russian: Влади́мир Миха́йлович Комаро́в, IPA: [vlɐˈdʲimʲɪr mʲɪˈxajləvʲɪtɕ kəmɐˈrof]; 16 March 1927 – 24 April 1967) was a Soviet test pilot, aerospace engineer, and cosmonaut. In October 1964, he commanded Voskhod 1, the first spaceflight to carry more than one crew member. He became the first Soviet cosmonaut to fly in space twice when he was selected as the solo pilot of Soyuz 1, its first crewed test flight. A parachute failure caused his Soyuz capsule to crash into the ground after re-entry on 24 April 1967, making him the first human to die in a space flight.He was declared medically unfit for training or spaceflight twice while he was in the program but continued playing an active role. During his time at the cosmonaut training center, he contributed to space vehicle design, cosmonaut training, evaluation and public relations. 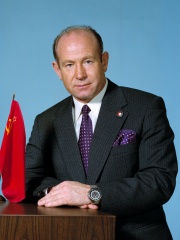 With an HPI of 67.24, Alexei Leonov is the 4th most famous Astronaut.  His biography has been translated into 73 different languages.

Alexei Arkhipovich Leonov (30 May 1934 – 11 October 2019) was a Soviet and Russian cosmonaut, Air Force major general, writer, and artist. On 18 March 1965, he became the first person to conduct a spacewalk, exiting the capsule during the Voskhod 2 mission for 12 minutes and 9 seconds. He was also selected to be the first Soviet person to land on the Moon although the project was cancelled. In July 1975, Leonov commanded the Soyuz capsule in the Apollo-Soyuz mission, which docked in space for two days with an American Apollo capsule. 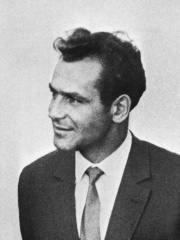 With an HPI of 64.35, Gherman Titov is the 5th most famous Astronaut.  His biography has been translated into 53 different languages.

Gherman Stepanovich Titov (Russian: Герман Степанович Титов; 11 September 1935 – 20 September 2000) was a Soviet cosmonaut who, on 6 August 1961, became the second human to orbit the Earth, aboard Vostok 2, preceded by Yuri Gagarin on Vostok 1. He was the fourth person in space, counting suborbital voyages of US astronauts Alan Shepard and Gus Grissom. A month short of 26 years old at launch, he was the youngest person to fly in space until 2021 when Oliver Daemen flew on Blue Origin NS-16 at the age of 18. Since Daemen flew a suborbital mission, Titov remains the youngest man to fly in Earth orbit. Titov's flight finally proved that humans could live and work in space. He was the first person to orbit the Earth multiple times (a total of 17), the first to pilot a spaceship and to spend more than a day in space. He was also the first to sleep in orbit and to suffer from space sickness (becoming the first person to vomit in space).Titov was the first photographer from space: he made the first manual photographs from orbit, thus setting a record for modern first photos of Earth from space. He also was the first person to film the Earth using a professional quality Konvas-Avtomat movie camera, which he used for ten minutes.In his subsequent life Titov continued to work for the Soviet space program, and played a major role in the Spiral project where he trained to become the first pilot of an orbital spaceplane. However, after the death of Yuri Gagarin in a military aircraft accident in 1968, the Soviet government decided it could not afford to lose its second cosmonaut, and so Titov's career as test pilot ended. Titov served in the Soviet Air Force, attaining the rank of colonel-general. In his final years in post-Soviet Russia he became a Communist politician. Despite having been chosen second, after Gagarin, to fly into space, it was Titov who later proposed the Soviet Government regularly celebrate Cosmonautics Day on April 12, the day of Gagarin's flight. 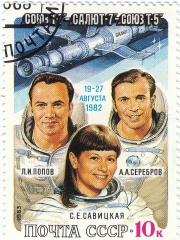 With an HPI of 60.52, Svetlana Savitskaya is the 6th most famous Astronaut.  Her biography has been translated into 56 different languages.

Svetlana Yevgenyevna Savitskaya (Russian: Светла́на Евге́ньевна Сави́цкая; born 8 August 1948) is a Russian former aviator and Soviet cosmonaut who flew aboard Soyuz T-7 in 1982, becoming the second woman in space. On her 1984 Soyuz T-12 mission she became the first woman to fly to space twice, and the first woman to perform a spacewalk. She set several FAI world records as a pilot. 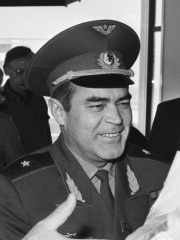 With an HPI of 60.23, Andriyan Nikolayev is the 7th most famous Astronaut.  His biography has been translated into 44 different languages. 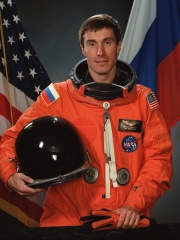 With an HPI of 59.69, Sergei Krikalev is the 8th most famous Astronaut.  His biography has been translated into 34 different languages.

Sergei Konstantinovich Krikalev (Russian: Сергей Константинович Крикалёв, also transliterated as Sergei Krikalyov; born 27 August 1958) is a Russian mechanical engineer and former cosmonaut. As a prominent rocket scientist, he is a veteran of six space flights and ranks third to Gennady Padalka and Yuri Malenchenko for the most time spent in space: a total of 803 days, 9 hours, and 39 minutes.Krikalev was stranded on board the Mir during the dissolution of the Soviet Union. As the country that had sent him into space no longer existed, his return was delayed and he stayed in space for 311 consecutive days, twice as long as the mission had originally called for.He retired from spaceflight in 2007 and was working as vice president of Space Corporation Energia. 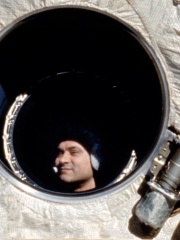 With an HPI of 59.68, Valeri Polyakov is the 9th most famous Astronaut.  His biography has been translated into 43 different languages.

Valeri Vladimirovich Polyakov (Russian: Валерий Владимирович Поляков, born Valeri Ivanovich Korshunov, Russian: Валерий Иванович Коршунов, 27 April 1942 – 7 September 2022) was a Soviet and Russian cosmonaut. He is the record holder for the longest single stay in space, staying aboard the Mir space station for more than 14 months (437 days 18 hours) during one trip. His combined space experience was more than 22 months.Selected as a cosmonaut in 1972, Polyakov made his first flight into space aboard Soyuz TM-6 in 1988. He returned to Earth 240 days later aboard TM-7. Polyakov completed his second flight into space in 1994–1995, spending 437 days in space between launching on Soyuz TM-18 and landing with TM-20, setting the record for the longest time continuously spent in space by an individual. 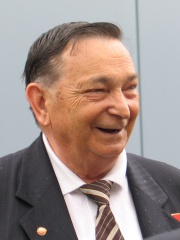 With an HPI of 58.87, Valery Bykovsky is the 10th most famous Astronaut.  His biography has been translated into 41 different languages.

Which Astronauts were alive at the same time? This visualization shows the lifespans of the 25 most globally memorable Astronauts since 1700.