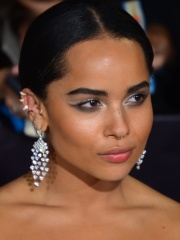 Zoë Isabella Kravitz (born December 1, 1988) is an American actress, singer, and model. The daughter of actor-musician Lenny Kravitz and actress Lisa Bonet, Kravitz made her acting debut in the romantic comedy film No Reservations (2007), and had her breakthrough portraying Angel Salvadore in the superhero film X-Men: First Class (2011), which earned her nominations for a Teen Choice Award and a Scream Award. Kravitz rose to prominence playing Christina in The Divergent Series (2014–2016) and Leta Lestrange in the Fantastic Beasts film series (2016–2018), and appeared as Toast the Knowing in Mad Max: Fury Road (2015) and voiced Catwoman in The Lego Batman Movie (2017) and Mary Jane Watson in Spider-Man: Into the Spider-Verse (2018). Read more on Wikipedia