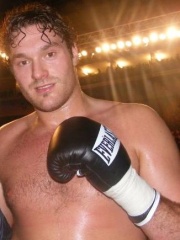 Tyson Luke Fury (born 12 August 1988) is a British professional boxer. He is a two-time heavyweight world champion, having held the WBC, The Ring magazine and lineal titles since defeating Deontay Wilder in February 2020; previously he held the unified WBA (Super), IBF, WBO, IBO, The Ring, and lineal titles after defeating Wladimir Klitschko in 2015. With his defeat of Wilder, Fury became the third heavyweight, after Floyd Patterson and Muhammad Ali, to hold The Ring magazine title twice, and the first heavyweight in history to have held the WBA (Super), WBC, IBF, WBO, and The Ring magazine titles. Read more on Wikipedia

Since 2007, the English Wikipedia page of Tyson Fury has received more than 22,128,168 page views. His biography is available in 27 different languages on Wikipedia making him the 102nd most popular boxer.

Among BOXERS In United Kingdom