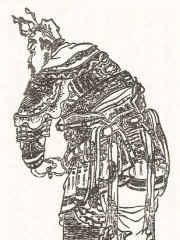 Zhang Fei (pronunciation ) (died July or August 221 AD), courtesy name Yide, was a military general serving under the warlord Liu Bei in the late Eastern Han dynasty and early Three Kingdoms period of China. Zhang Fei and Guan Yu, who were among the earliest to join Liu Bei, shared a brotherly relationship with their lord and accompanied him on most of his early exploits. Zhang Fei fought in various battles on Liu Bei's side, including the Red Cliffs campaign (208–209), takeover of Yi Province (212–214), and Hanzhong Campaign (217–218). Read more on Wikipedia

Since 2007, the English Wikipedia page of Zhang Fei has received more than 675,482 page views. His biography is available in 31 different languages on Wikipedia (up from 30 in 2019). Zhang Fei is the 104th most popular military personnel (down from 101st in 2019), the 60th most popular biography from China and the 5th most popular Chinese Military Personnel.

Zhang Fei is most famous for being one of the generals of the Kingdom of Shu Han during the Three Kingdoms era.