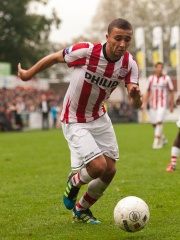 Zakaria Labyad (Arabic: زكريا لبيض‎; born 9 March 1993) is a Dutch-born Moroccan professional footballer who plays as an attacking midfielder for Ajax in the Eredivisie. The player has previously represented the Netherlands U17 team at international level before switching his allegiance to Morocco and playing for them at the Under-23 level. Read more on Wikipedia

Since 2007, the English Wikipedia page of Zakaria Labyad has received more than 294,394 page views. His biography is available in 21 different languages on Wikipedia making him the 5,464th most popular soccer player.