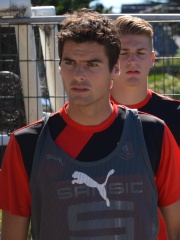 Yoann Miguel Gourcuff (French pronunciation: ​[jɔan ɡuʁkyf] or Breton pronunciation: [joãnː ɡuːrkỹː]; born 11 July 1986) is a French professional footballer who is a free agent. He operates mainly as an attacking midfielder, but can also be utilized as a withdrawn striker and is described as a "playmaker of real quality" who "is an accomplished passer of the ball". Gourcuff has been described by former French international David Ginola as the best French player of his generation. Read more on Wikipedia

Since 2007, the English Wikipedia page of Yoann Gourcuff has received more than 798,189 page views. His biography is available in 44 different languages on Wikipedia making him the 2,372nd most popular soccer player.