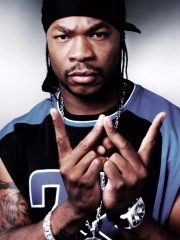 Alvin Nathaniel Joiner (born September 18, 1974), better known by his stage name Xzibit (pronounced "exhibit"), is an American rapper, actor, songwriter, television presenter, and radio personality. Xzibit began his musical career after the release of his debut studio album At The Speed Of Life on October 15, 1996. The album generated both critical and commercial success, peaking at number 74 on the Billboard 200. Read more on Wikipedia

Page views of Xzibits by language

Among singers, Xzibit ranks 945 out of 3,541. Before him are Lenny Kuhr, Chava Alberstein, Linda Martin, Peaches, Diana Damrau, and Arthur Brown. After him are Bunny Wailer, Clare Torry, Alain Bashung, Lizzo, Beth Hart, and Billy Ocean.