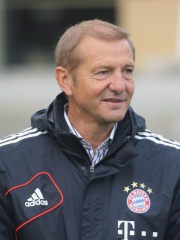 Wolfgang Dremmler (born 12 July 1954) is a German former footballer who played as a midfielder. A trained metalworker, Dremmler was part of the West Germany team that reached the 1982 FIFA World Cup final against Italy at Santiago Bernabéu. Altogether he played in 310 Bundesliga matches (15 goals) for Eintracht Braunschweig and FC Bayern Munich, the club he joined in 1979 at the recommendation of Paul Breitner to win four Bundesliga and three German Cup trophies until his retirement due to a knee-injury in 1986. Read more on Wikipedia

Since 2007, the English Wikipedia page of Wolfgang Dremmler has received more than 36,407 page views. His biography is available in 21 different languages on Wikipedia making him the 2,527th most popular soccer player.