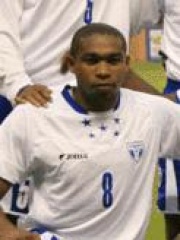 Wilson Roberto Palacios Suazo (Spanish pronunciation: [ˈwilsom paˈlasjos]; born 29 July 1984) is a Honduran footballer who plays as a midfielder. He currently plays for Real Sociedad.Born in La Ceiba, he played for Victoria and Olimpia in Honduras before moving to England, where he played for Birmingham City and Wigan Athletic. In 2009, he joined Tottenham Hotspur, generally playing central defensive midfield as he did for Wigan, though he was occasionally used as a right midfielder for Spurs. Read more on Wikipedia

Since 2007, the English Wikipedia page of Wilson Palacios has received more than 438,268 page views. His biography is available in 37 different languages on Wikipedia making him the 5,960th most popular soccer player.

Among SOCCER PLAYERS In Honduras