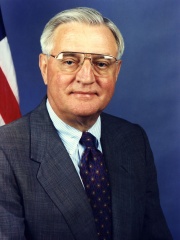 Walter Frederick "Fritz" Mondale (January 5, 1928 – April 19, 2021) was an American lawyer and politician who served as the 42nd vice president of the United States from 1977 to 1981 under President Jimmy Carter. A U.S. senator from Minnesota from 1964 to 1976, he was the Democratic Party's nominee in the 1984 presidential election, but lost to incumbent Ronald Reagan in an Electoral College and popular vote landslide. Reagan won 49 states while Mondale carried his home state of Minnesota and the District of Columbia. His vice presidential nominee, U.S. Representative Geraldine Ferraro from New York, was the first female vice-presidential nominee of any major party in U.S. Read more on Wikipedia

Among politicians, Walter Mondale ranks 5,469 out of 15,710. Before him are Rafael Caldera, Ludovico III Gonzaga, Marquis of Mantua, Gülçiçek Hatun, Domnall mac Ailpín, Eleanor of Aragon, Queen of Castile, and Guo Moruo. After him are Robert, Archduke of Austria-Este, Joan III, Countess of Burgundy, Omar Suleiman, Vologases II of Parthia, Theagenes of Thasos, and Otto II, Margrave of Meissen.