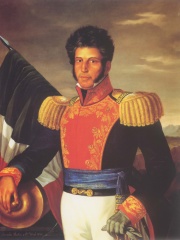 Vicente Ramón Guerrero Saldaña (Spanish: [biˈsente raˈmoŋ ɡeˈreɾo salˈdaɲa]; August 10, 1782 – February 14, 1831) was one of the leading revolutionary generals of the Mexican War of Independence. He fought against Spain for independence in the early 19th century, and later served as President of Mexico, coming to power through a coup in the aftermath of a disputed election in 1828. During his presidency he championed the cause of Mexico's common people, and abolished slavery on a national level. Read more on Wikipedia

Among politicians, Vicente Guerrero ranks 4,308 out of 15,710. Before him are Emperor Duanzong, Ivan Serov, Baruch ben Neriah, Adel Shah, Haakon II of Norway, and Prince Ernest Augustus of Hanover. After him are Leo Jogiches, William X, Duke of Aquitaine, Princess Maria Antonia of Naples and Sicily, Pál Teleki, Salva Kiir Mayardit, and Phraortes.