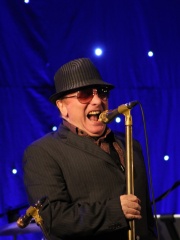 Sir George Ivan "Van" Morrison OBE (born 31 August 1945) is a Northern Irish singer-songwriter, instrumentalist and record producer. His professional career began as a teenager in the late 1950s, playing a variety of instruments including guitar, harmonica, keyboards and saxophone for various Irish showbands, covering the popular hits of that time. Van Morrison rose to prominence in the mid-1960s as the lead singer of the Northern Irish R&B and rock band, Them, with whom he recorded the garage band classic "Gloria". Read more on Wikipedia

Since 2007, the English Wikipedia page of Van Morrison has received more than 6,236,107 page views. His biography is available in 41 different languages on Wikipedia making him the 236th most popular singer.

Among singers, Van Morrison ranks 236 out of 3,001. Before him are Robbie Williams, Beyoncé, Tarkan, Sade, Chris Cornell, and Frida Boccara. After him are Sonny Bono, Lil Wayne, Gene Vincent, Lucia Popp, Teresa Berganza, and Gianni Morandi.