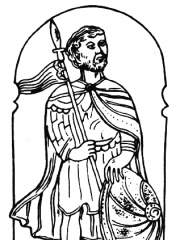 Vaišelga or Vaišvilkas (also spelled as Vojszalak, Vojšalk, Vaišalgas; killed on December 9, 1268) was the Grand Duke of Lithuania (1264–1267). He was son of Mindaugas, the first and only Christian King of Lithuania. Nothing is known about the youth of Vaišvilkas as he entered historical sources only in 1254 when he made a treaty, in the name of his father King Mindaugas, with Daniel of Halych-Volhynia. Read more on Wikipedia

Page views of Vaišvilkas by language

Among politicians, Vaišvilkas ranks 4,722 out of 15,710. Before him are Yaqub Beg, Frederick I, Margrave of Meissen, Wonjong of Goryeo, Aaron Burr, Prince Louis of Battenberg, and Princess Christine Louise of Oettingen-Oettingen. After him are Jarmila Kratochvílová, Carausius, John Hawkwood, Leonnatus, Kiril, Prince of Preslav, and Ásgeir Ásgeirsson.