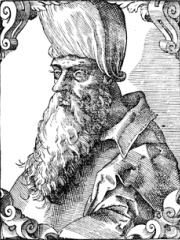 Al-Ashraf Abu Al-Nasr Tuman bay (Arabic: الأشرف أبو النصر طومان باي‎), better known as Tuman bay II (Arabic: طومان باي‎), was the last Sultan of Egypt before the country's conquest by the Ottoman Empire in 1517. He acceded to the sultanic throne during the final period of Mamluk rule in Egypt, after the defeat of his predecessor, Sultan Al-Ashraf Qansuh al-Ghawri by Ottoman Sultan Selim I at the Battle of Marj Dabiq in 1516. Read more on Wikipedia

Since 2007, the English Wikipedia page of Tuman bay II has received more than 97,487 page views. His biography is available in 15 different languages on Wikipedia making him the 6,431st most popular politician.

Among politicians, Tuman bay II ranks 6,395 out of 14,801. Before him are Moritz, Landgrave of Hesse, Malik Shah, Anaximenes of Lampsacus, Henry III, Duke of Brabant, Tiberius Sempronius Gracchus, and King Xuan of Zhou. After him are Mesut Yılmaz, Emperor Kōmyō, Aymon, Count of Savoy, Archduke Johann Salvator of Austria, Borso d'Este, Duke of Ferrara, and Odo III, Duke of Burgundy.