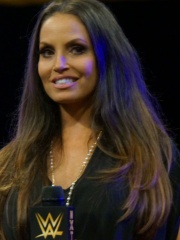 Patricia Anne Stratigeas (; born December 18, 1975) better known by the ring name Trish Stratus, is a Canadian fitness master, fitness model and professional wrestler. Often regarded as one of the greatest women's performers, she was also one of the most popular female superstars in World Wrestling Entertainment (WWE).After beginning her career as a fitness model, Stratigeas began working for the World Wrestling Federation (WWF), which was later renamed World Wrestling Entertainment (WWE). Early in her career, she was mostly involved in sexually themed storylines, such as managing the team T & A (Test & Albert, while doubling as a slang expression abbreviated from "Tits and Ass"), and a kayfabe affair with Vince McMahon's Mr. Read more on Wikipedia

Among WRESTLERS In Canada