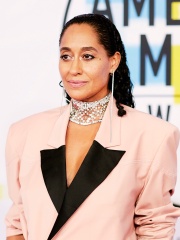 Tracee Joy Silberstein (born October 29, 1972), known professionally as Tracee Ellis Ross, is an American actress, singer and television host. She is known for her lead roles in the television series Girlfriends (2000–2008) and Black-ish (2014–present). Ross owns Pattern Beauty, the hair-care line for curly hair.Ross is the daughter of actress and Motown recording artist Diana Ross and her ex-husband Robert Ellis Silberstein. Read more on Wikipedia

Since 2007, the English Wikipedia page of Tracee Ellis Ross has received more than 7,842,139 page views. Her biography is available in 18 different languages on Wikipedia making her the 7,833rd most popular actor.