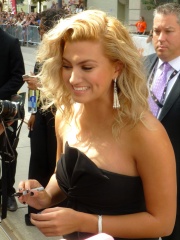 Victoria Loren Kelly (born December 14, 1992) is an American singer, songwriter, actress, and record producer. Kelly first gained recognition after posting videos on YouTube as a teenager, and made it through to Hollywood week on the ninth season of American Idol in 2010. Thereafter, she independently released her self-produced debut EP in 2012, Handmade Songs by Tori Kelly. Read more on Wikipedia

USA Today
'American Idol' closes Top 24 as Jewel disagrees with Katy Perry and Madison Watkins bonds with Tori Kelly over faith
'American Idol' completed the second night of Top 24 performances Monday, with 16 to advance after votes are revealed on April 11 show.
USA TODAY, Bill Keveney, USA TODAY
ETCanada.com
Madison Watkins Covers Justin Bieber’s ‘Holy’ And Duets With Tori Kelly On ‘American Idol’
Madison Watkins took the “American Idol” judges and viewers to church on Monday night.  The 26-year-old singer-songwriter stood out from the crowd as the contestants vied to make it to the top 16, with each singer performing a solo as well as a celebrity duet…
etcanadadigital