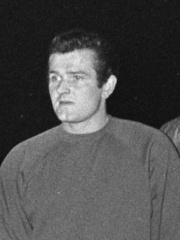 Thomas Johnstone Lawrence (14 May 1940 – 10 January 2018) was a Scottish professional footballer, who played as a goalkeeper for Liverpool and Tranmere Rovers from the 1950s to the 1970s. Read more on Wikipedia

Since 2007, the English Wikipedia page of Tommy Lawrence has received more than 251,451 page views. His biography is available in 17 different languages on Wikipedia making him the 3,079th most popular soccer player.