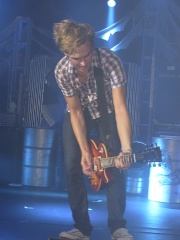 Thomas Michael Fletcher (born 17 July 1985) is an English musician, singer, composer, author and YouTube vlogger. He is one of the lead vocalists and rhythm guitarist of English pop rock band McFly, in addition to being the group's founder. He originally auditioned and was accepted into the band Busted before losing out on the place after the record label Island decided the band should be a trio rather than a four-piece. Read more on Wikipedia

Among musicians, Tom Fletcher ranks 2,630 out of 2,675. Before him are Flume, Conor Oberst, Billy Martin, Tom Walker, Jonathan Coulton, and U. Srinivas. After him are Jordan Galland, Kjartan Sveinsson, High Contrast, Ingrid Michaelson, Katy B, and J. R. Rotem.