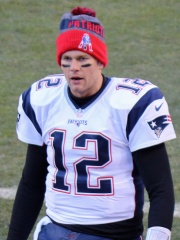 Thomas Edward Patrick Brady Jr. (born August 3, 1977) is an American football quarterback for the Tampa Bay Buccaneers of the National Football League (NFL). He spent the first 20 seasons of his career with the New England Patriots, playing in nine Super Bowls and winning six of them (XXXVI, XXXVIII, XXXIX, XLIX, LI, and LIII), the most of any player in NFL history. Read more on Wikipedia

Since 2007, the English Wikipedia page of Tom Brady has received more than 37,760,482 page views. His biography is available in 35 different languages on Wikipedia making him the 2nd most popular american football player.