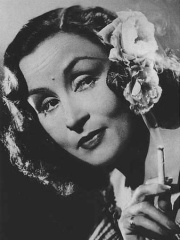 Tita Merello (born Laura Ana Merello; 11 October 1904 in Buenos Aires, Argentina – 24 December 2002 in Buenos Aires) was a prominent Argentine film actress, tango dancer and singer of the Golden Age of Argentine Cinema (1940–1960). In her 6 decades in Argentine entertainment, at the time of her death, she had filmed over thirty movies, premiered twenty plays, had nine television appearances, completed three radio series and had had countless appearances in print media. She was one of the singers who emerged in the 1920s along with Azucena Maizani, Libertad Lamarque, Ada Falcón, and Rosita Quiroga, who created the female voices of tango. Read more on Wikipedia

Among actors, Tita Merello ranks 3,012 out of 10,030. Before her are Harry Baur, May Britt, Silas Weir Mitchell, Charles Coburn, Heinz Erhardt, and Jeanne Crain. After her are Tarcísio Meira, Vladimir Zeldin, Steve Zahn, Gérard Darmon, Richard Sammel, and Joan Blondell.

Among ACTORS In Argentina