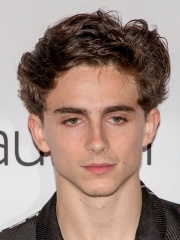 Timothée Hal Chalamet (born December 27, 1995) is an American actor. He began his acting career in short films, before appearing in the television drama series Homeland in 2012. Read more on Wikipedia

Since 2007, the English Wikipedia page of Timothée Chalamet has received more than 11,538,666 page views. His biography is available in 38 different languages on Wikipedia making him the 4,822nd most popular actor.