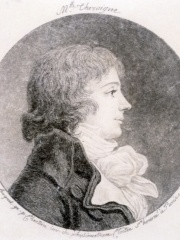 Anne-Josèphe Théroigne de Méricourt (born Anne-Josèphe Terwagne; 13 August 1762 – 8 June 1817) was a Belgian singer, orator and organizer in the French Revolution. She was born at Marcourt (Prince-Bishopric of Liège)(from which comes the appellation "de Méricourt"), a small town in the province of Luxembourg, Wallonia, in modern Belgium. She was active in the French Revolution and worked within the Austrian Low Countries to also foster revolution. Read more on Wikipedia

Theroigne de Mericourt was a French Revolutionary, and she is most famous for being a part of the Society of the Friends of Truth, which was an organization that advocated for radical social and political change.

Among politicians, Theroigne de Mericourt ranks 3,717 out of 15,710. Before her are David I of Scotland, Ingvar Carlsson, Peter I, Duke of Bourbon, Princess Ragnhild, Mrs. Lorentzen, Emperor Ai of Tang, and Parysatis. After her are Bachir Gemayel, Rama III, Princess Alexandra of Greece and Denmark, Ḫattušili I, Charles-Michel de l'Épée, and Jangsu of Goguryeo.