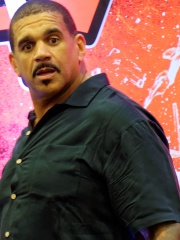 Charles Wright (born May 16, 1961), better known under his ring name The Godfather, is an American professional wrestler. He is best known for his tenure with the World Wrestling Federation throughout the 1990s and early 2000s, and underwent several gimmick changes; the most notable were Papa Shango, Kama, Kama Mustafa, and The Godfather.Among other accolades, Wright is a two-time USWA Unified World Heavyweight Champion, a one-time WWF Intercontinental Champion, and a one-time WWF World Tag Team Champion (with Bull Buchanan). He headlined Saturday Night's Main Event XXXI against Bret Hart for the WWF Championship. Read more on Wikipedia

Page views of The Godfathers by language

Among wrestlers, The Godfather ranks 257 out of 703. Before him are Pertti Ukkola, Natalya Neidhart, Paige, Alina Dumitru, Kevin Owens, and Paweł Nastula. After him are Ryoko Tani, Billy Gunn, Hardcore Holly, Charalambos Cholidis, Joseph Atiyeh, and Namig Abdullayev.