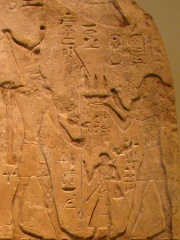 Shepsesre Tefnakht (in Ancient Greek: Τνεφαχθός, romanized: Tnephachthos) was a prince of Sais and founder of the relatively short Twenty-fourth Dynasty of Egypt; he rose to become a Chief of the Ma in his home city. He is thought to have reigned roughly 732 BCE to 725 BCE, or seven years. Tefnakht I first began his career as the "Great Chief of the West" and Prince of Sais and was a late contemporary of the last ruler of the 22nd Dynasty: Shoshenq V. Tefnakht I was actually the second ruler of Sais; he was preceded by Osorkon C, who is attested by several documents mentioning him as this city's Chief of the Ma and Army Leader, according to Kenneth Kitchen, while his predecessor as Great Chief of the West was a man named Ankhhor. Read more on Wikipedia

Page views of Tefnakhts by language

Among politicians, Tefnakht ranks 7,485 out of 15,710. Before him are Merneferre Ay, Abdullah of Pahang, Poul Nyrup Rasmussen, Ieng Thirith, Kâzım Karabekir, and Publius Decius Mus. After him are Edward the Exile, Zu Yi, Prince Philipp of Saxe-Coburg and Gotha, Kashta, John I, Duke of Brittany, and Geng Ding.

Others Deceased in 800 BC