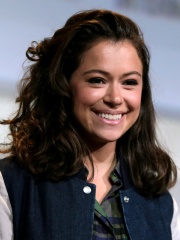 Tatiana Gabriele Maslany (; born September 22, 1985) is a Canadian actress. She is known for portraying multiple characters in the science fiction television series Orphan Black (2013–2017), which aired on Space in Canada and BBC America in the United States. For her performance in Orphan Black, Maslany won a Primetime Emmy Award (2016), a TCA Award (2013), two Critics' Choice Awards (2013 and 2014), and five Canadian Screen Awards (2014–18), in addition to receiving nominations for a Golden Globe Award and a Screen Actors Guild Award. Read more on Wikipedia

Since 2007, the English Wikipedia page of Tatiana Maslany has received more than 4,946,581 page views. Her biography is available in 31 different languages on Wikipedia making her the 5,356th most popular actor.