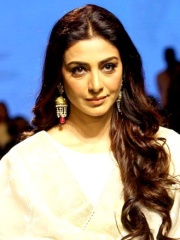 Tabassum Fatima Hashmi (born 4 November 1971), known by the mononym Tabu, is an Indian film actress primarily working in Hindi-language films. She has additionally worked in other regional films in different languages including Telugu, Tamil, Malayalam, Bengali and Marathi. Regarded as one of the most accomplished actresses in India, Tabu has often played troubled, complicated women in a range of characters, from fictional to literary, in both mainstream and independent cinema, as well as some American productions. Read more on Wikipedia

Since 2007, the English Wikipedia page of Tabu has received more than 159,172 page views. Her biography is available in 37 different languages on Wikipedia making her the 6,368th most popular actor.

Page views of Tabus by language