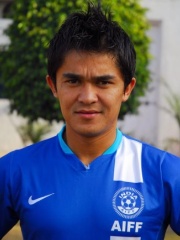 Sunil Chhetri (born 3 August 1984) is an Indian professional footballer who plays as a striker or winger and captains both the Indian Super League side Bengaluru FC and the Indian national football team. Popularly known as "Captain Fantastic", Chhetri is the third-highest international goalscorer among active players, after Cristiano Ronaldo and Ali Mabkhout, and 12th-highest of all time, as of June 2021. He is both the most-capped player and all-time top goalscorer for his national team.Chhetri began his professional career at Mohun Bagan in 2002, moving to JCT where he scored 21 goals in 48 games. Read more on Wikipedia

Among SOCCER PLAYERS In India

Among soccer players born in India, Sunil Chhetri ranks 1. After him are Bhaichung Bhutia (1976).