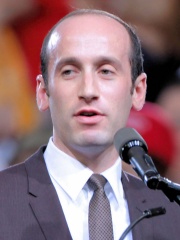 Stephen Miller (born August 23, 1985) is an American government official who serves as a senior advisor for policy to President Donald Trump. His politics have been described as far-right and anti-immigration. He was previously the communications director for then-Senator Jeff Sessions. He was also a press secretary for U.S. Read more on Wikipedia

Since 2007, the English Wikipedia page of Stephen Miller has received more than 137,048 page views. His biography is available in 17 different languages on Wikipedia making him the 14,739th most popular politician.