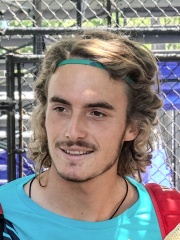 Stefanos Tsitsipas (Greek: Στέφανος Τσιτσιπάς, pronounced [ˈstefanos t͡sit͡siˈpas]; born 12 August 1998) is a Greek professional tennis player. He is the youngest player ranked in the top 10 by the Association of Tennis Professionals (ATP) and has a career-high ranking of No. 5 in the world, making him the highest-ranked Greek player in history. Read more on Wikipedia

Since 2007, the English Wikipedia page of Stefanos Tsitsipas has received more than 2,407,344 page views. His biography is available in 27 different languages on Wikipedia making him the 298th most popular tennis player.

Among TENNIS PLAYERS In Greece

Among tennis players born in Greece, Stefanos Tsitsipas ranks 1. After him are Eleni Daniilidou (1982) and Maria Sakkari (1995).