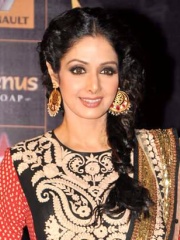 Sridevi Boney Kapoor Ayyappan (born as Shree Amma Yanger Ayyapan; 13 August 1963 – 24 February 2018) was an Indian actress and film producer, who worked in Telugu, Tamil, Hindi, Malayalam, and Kannada language films. Regarded as one of the greatest stars of Indian cinema and sometimes labelled its "First Female Superstar", she appeared in a range of genres, from slapstick comedy to epic dramas. She was the recipient of various accolades, including the Padma Shri, a National Film Award, a Nandi Award, the Tamil Nadu State Film Award, the Kerala State Film Award, four Filmfare Awards, including a Filmfare Lifetime Achievement Award and three Filmfare Awards South.Sridevi made her debut as a child actress in the 1967 Tamil film Kandhan Karunai at the age of four, and started her acting career in lead roles as a child in M. A. Thirumugam’s 1969 mythological Tamil film Thunaivan. Read more on Wikipedia

Page views of Sridevis by language