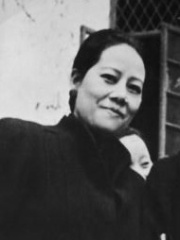 Soong Ai-ling (traditional Chinese: 宋藹齡; simplified Chinese: 宋蔼龄; pinyin: Sòng Àilíng), legally Soong E-ling or Eling Soong (June 14, 1888 – October 18, 1973) was a Chinese businesswoman, the eldest of the Soong sisters and the wife of H. H. Kung (Kung Hsiang-Hsi), who was the richest man in the early 20th century Republic of China. The first character of her given name is written as 靄 (same pronunciation) in some texts. Read more on Wikipedia

Among politicians, Soong Ai-ling ranks 6,636 out of 15,710. Before her are Johann Nepomuk Karl, Prince of Liechtenstein, Otto I, Margrave of Brandenburg, Tacfarinas, Einar Gerhardsen, Kaliman I of Bulgaria, and Meinhard III, Count of Gorizia-Tyrol. After her are Christian III, Count Palatine of Zweibrücken, Alexander Farnese, Prince of Parma, Prince Oscar Bernadotte, Emperor Junnin, Sheng Shicai, and George, Grand Duke of Mecklenburg-Strelitz.