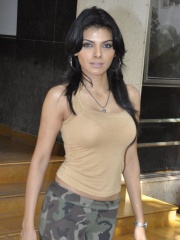 Sherlyn Chopra is an Indian film actress and model known for her work in Bollywood. In July 2012, Chopra became the first Indian woman to pose nude for Playboy magazine. The photos were released two years later. Read more on Wikipedia

Since 2007, the English Wikipedia page of Sherlyn Chopra has received more than 1,968,636 page views. Her biography is available in 15 different languages on Wikipedia making her the 8,640th most popular actor.