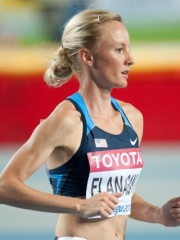 Shalane Grace Flanagan (born July 8, 1981) is a former American long-distance runner, Olympic medalist and New York City Marathon champion. She was the first American woman to win the New York City Marathon since 1977. She holds the NACAC area record in the 5000 meters (indoor) and the 10k road race.She won the silver medal at the 2008 Olympics in the 10,000 m (after an upgrade from bronze) and the bronze medal at the 2011 IAAF World Cross Country Championships. Read more on Wikipedia

Since 2007, the English Wikipedia page of Shalane Flanagan has received more than 805,389 page views. Her biography is available in 16 different languages on Wikipedia making her the 2,000th most popular athlete.